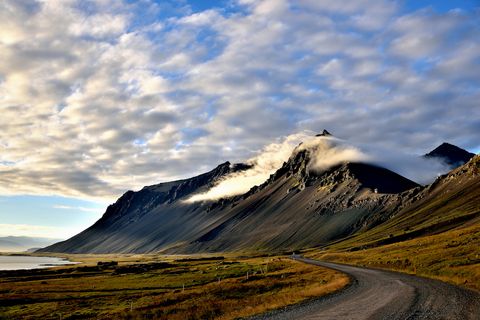 With 2019 just around the corner, it’s the perfect time to reflect on all the gains you made this year and all that’s left to achieve and experience in the year to come. As cliché as that may sound, we fully embrace setting personal goals. And when said goals involve travel and adventure, there’s even more incentive to stand behind them.

To send you into the new year on a high note, we’ve pulled together a dozen inspiring bucket-list adventures, like backpacking to remote landscapes in Peru, surfing in Indonesia, and touring renowned whiskey distilleries in Scotland. Wherever you wind up, pack a Hydro Flask water bottle to stay hydrated and respect local environments by fighting single-use plastic waste in the process. It’s win-win.

Iceland is unlike any place else on earth, and it needs to be at the top of your bucket list. One of the most unique ways to experience the insane, alien-like landscape is with a 4×4 rental—not your average lifted SUV but a “Super Jeep” that’s part monster truck, part Land Cruiser.

These are about the coolest rigs you’ll ever see, and are capable of maneuvering just about any terrain imaginable. Of course you can always rent jacked up Land Rover Defender or camper van too, if you prefer a traditional ride. Either way, your Instagram is about to blow minds back home.

Located a handful of hours from the staging town of Cusco deep in the Peruvian Andes, Vinicunca—or Rainbow Mountain, as enterprising tour operators have begun to call it—is easily one of the most unique locations on earth. It’s quite literally a rainbow-hued saddle in a rainbow-colored mountain range, made so by naturally occurring minerals in the soil.

A word to the wise, though: You’re going to have to earn this one, as the multi-mile hike tops out at well over 15,000 feet in elevation. A 32 oz Wide Mouth Hydro Flask with straw lid would be a wise investment to bring along on this one.

Climb to Everest Base Camp

At 17,600 feet, reaching Everest Base Camp is an adventure much more achievable than summiting the mountain itself. Trekking in can take up to 20 days from Kathmandu, and offers ample time to acclimatize and meet other adventure tourists, climbers, and locals alike.

Even a few days at EBC can feel like an otherworldly experience, as it offers a taste of the highest peak on earth, without the risks of actually climbing it.

Prepare to swim in private lagoons, hike through lush jungles, and eat some of the best food in the world—this is what southern Thailand is all about. The fact that a traditional wooden boat makes accessing this all possible is an added bonus.

Hidden deep in British Columbia’s Kootenay Rockies is what locals call “The Powder Highway,” one road that accesses a handful of some of the few remaining truly-epic ski towns in North America.

Surrounding these down-home, funky little towns are truly unreal mountains and endless deep powder. From cat and heli-skiing to mom and pop ski hills, the region is an unspoiled reprieve from the over-crowded luxury developments that have engulfed most of the continent’s “best” resorts.

For nearly a century, this 40+ mile stretch of switchbacks carved into a Bolivian mountainside has been considered the world’s most dangerous road—and for good reason. With 2,000-foot cliffs accompanying every inch, the road has claimed thousands of lives.

Recent modernization efforts have added pavement and some guardrails, but it’s still dangerous as hell. Lucky for you, a number of local companies now offer mountain bike tours, offering the opportunity to descend the road on two wheels.

Don’t let the mental image of children’s books dissuade you: Riding in a basket over 3,000 feet in the air with almost nothing to hold you in place is anything but a walk in the park. Scary as it may be, this is one adventure on the list that’s especially family-friendly, so take advantage and see some of the America’s most stunning landscapes from a truly unique perspective. Fill the Hydro Flask Unbound Cooler Pack with snacks and drinks, and take in the view.

Survey volcanoes by Helicopter in Oregon

Hot air balloons not badass enough for you? Try jumping in an R44 helicopter at Big Mountain Heli Tours in Bend, Oregon, and exploring the Cascade Mountains’ “Ring of Fire,” home to more than a handful of the state’s 19 volcanoes—some dormant, some already blown, and others actively steaming.

At over 7,000 feet, the tiny three-passenger choppers feel every shift in wind and weather, and so will you. Still not adventurous enough? Ask to fly “doors off.” It’s exactly what it sounds like, and exhilarating to say the least.

Take a whiskey tour in Scotland

Whiskey tasting may not sound like an adventure, but it sure will be once you catch a glimpse of the rugged coastline and experience the effort it takes to get to the island of Islay—Scotland’s westernmost point and home to the world’s preeminent whiskey distillers, from Ardbeg and Bruichladdich to Lagavulin, Laphroaig and more.

Moreover, wrapping your tastebuds around the extremely peaty Scotch the region is known for is an adventure in and of itself. Be sure to bring your own Hydro Flask 10 oz Rocks Flask, and take one more tasting for the road.

A network of 5,000+ miles of almost entirely unpaved roads, the Trans-America Trail snakes its way from the Atlantic to the Pacific through America’s most adventurous terrain, delivering one of the most thrilling off-road routes in the world.

Traverse it on a dual-sport motorcycle, or an extremely capable 4×4 rig. Either way, just be sure to pack a patch kit or ten, and remember to keep the rubber side down.

Explore the Faroe Islands on Foot

Easily one the of the most unbelievable natural landscapes in the world, this chain of 18 rocky, volcanic islands between Denmark and Iceland is a haven for outdoor enthusiasts. Endless sea cliffs, soaring waterfalls, and expansive valleys make for truly memorable hiking.

First off, surfing anywhere is an adventure. (Seriously, it’s really, really difficult.) But if you’re already capable, then there’s no better place to test your skills than Indonesia, the Southeast Asian nation made up of 17,508 islands. While you’re there, give back to the local community through conservation efforts and other volunteer services to help keep one of the world’s most bio diverse ecosystems healthy for the next generation of adventurers.