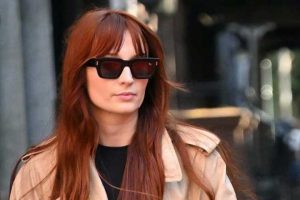 From blunt fringes to side-swept bangs, these 63 fringe hairstyles are guaranteed to inspire your next hair transformation.

Should I get a fringe? Or, if you’re reading this from American shores, should I get bangs?

It’s a question that many people ask themselves at least once in their lifetime – and, like any hair transformation, it requires some consideration. After all, depending on the style you go for, fringes and bangs can be a major commitment, given that they require regular trims and styling. It’s important to consider, then, whether you mind hair on your face and in your eyes, whether you’re able to handle regular trims, and whether you will be willing to spend some time styling those eyebrow-skimming layers each morning? Because, speaking as someone who has dabbled in fringe hairstyles, one night of tossing and turning can cause you to wake up with an unplanned three-pronged pompadour the next day (thankfully, spritzing with dry shampoo or wetting your hair down and blow-drying tends to do the trick).

Should you opt for a fringe or bangs?

While there are many reasons not to get a fringe cut in, there are also plenty of reasons to take the plunge, too. The most important one being, of course, that it’s a dramatic change that… well, that isn’t actually all that dramatic. Because face it, the rest of your hair and style can remain untouched if you ask your hairdresser for a blunt fringe, a soft side-swept number or even something as bold as ‘baby bangs’ (think Audrey Hepburn’s short, wispy, impulse fringe in Roman Holiday).

Essentially, the ever-versatile fringe hairstyle is an incredibly chic and accessible look, which really can be tailored to suit any face shape or style. Don’t believe us? Get ready for some serious bangs inspiration…

Celebrities with bangs and fringe hairstyles

If we could wrap up the ideal autumn hair style in one photo: Sophie Turner’s new ‘do would be it. The layered curtain fringe together with her waist length, auburn hair ticks all our autumnal boxes. (We’re also obsessed with her camel trench coat). Love.

A longtime fan of curtain bangs, Dakota Johnson debuted a new type of fringe at the 2022 Oscars: heavier and cut straight across, it’s a classic for a reason.

Nicola Coughlan just debuted a new 70s-esque fringe at the Miu Miu Paris Fashion Week show. Cut heavy across eyebrows, the bangs sweep her eyelids without being piecey or wispy. Bold and softly blunt, it suits her down to the ground.

Seen arriving at the Balenciaga show during Paris Fashion Week, Alexa Demie’s light-reflecting micro-fringe was back in full force. Cut close to the scalp and laid flat, her short fringe sits straight across the width of her forehead before following the shape of her face as it naturally curves around. A statement cut, it suits her boundary-pushing sense of style.

Katy Perry has gone back to the dark side.

Katy Perry has been sporting a blonde bob for a while now, but the singer-songwriter decided to switch things up in a big way when she attended the star-studded opening gala for The Academy Museum Of Motion Pictures in Los Angeles.

Fans have piled praise on the darker autumn-ready colour, the retro beehive, and the longer length – all of which feels very Katy Perry circa 2001. It’s that chic sweeping side fringe, however, that caught our attention in particular – especially as side bangs are being dubbed the big beauty trend of 2001.

Thanks to its choppy layers, the fringe gives Perry’s nostalgia-inducing new hairstyle a textured, piecey finish, and draws attention to her brows and eyes in a big way, too. Anyone else tempted to try one out for themselves?

If you’ve ever gotten a fringe, you’ll know how painful the regrowth period can be. Earlier this year, Anne Hathaway got a full fringe and it seems the The Devil Wears Prada actor has mastered how to style her hair now that it’s growing out.

Hathaway was recently spotted on the set of upcoming movie WeCrashed with her long bangs swept into a choppy side fringe. The sweeping hairstyle is reminiscent of the hairdos we used to wear in secondary school – but with a chic twist.

This weekend Bella Hadid took to her Instagram stories to reveal her brand new self-administered haircut. “I cut my bangs” read the first video, while Hadid fiddled with her newly-trimmed tousled bangs. She even offered her hairdressing services out to fans, in a subsequent clip asking, “Would you let me cut your bangs. Be honest”. And given she did such a good job on her own, it’s hardly surprising 80% of respondents answered “yes, so cute”.

Miley Cyrus is making the most out of her time at home. The singer has started a new Instagram Live series called Brightminded, in which she discusses various topics and invites a range of guests to join her.

In yesterday’s show, Cyrus was joined by her hairstylist Justin Anderson and presenter Kristen Cavallari. When they joined the live stream, Cyrus told them, “Don’t look at the hair,” before pulling out a pair of scissors and adding, “these puppies.”

She continued, “You know how your phone listens to you and starts posing things right after you say it? The minute I gave myself this haircut, all of a sudden all of my updates were just Tiger King memes.” Fans on social media have been comparing Cyrus’s new hairstyle to Joe Exotic from the hit Netflix show.

“But I realised what I did,” Cyrus said. “Lucky for me I won’t be seeing anyone.”

Maya Jama is known for her long, dark hair, which she either wears in nautral curls or in a sleek and straight finish. However, the radio host has changed things up by cutting in a fringe.The blunt cut skims Jama’s eyebrows, giving a seriously cool look. We wouldn’t expect anything less.

Rihanna surprised the fashion world (in the best possible way) when her models took to the catwalk at Paris Fashion Week to showcase another 17 brilliant designs from the Fenty luxury fashion range. Keen to toast her label’s success, RiRi headed to a party at Manko restaurant – and she did so with a new hairstyle, too. That’s right: the musician, businesswoman, designer and icon has added a piecey fringe (or bangs, if you prefer) – and it’s completely transformed her look for autumn.

Zendaya stepped out at the Euphoria premiere with a brand new hairstyle, and gave us serious bangs envy in the process. The actor wore a retro ponytail with a wispy (and likely faux) fringe, which skimmed her brows before edging to longer tendrils at the temple.

The Avengers star recently cut in a set of lightly feathered bangs, just short enough to show off her eyeliner.

Charlize Theron attended the rocked a faux fringe (in the classic baby bangs style) at the Long Shot premiere. The look was created by Theron’s longtime hairstylist, Adir Abergel, who told Allure: “The inspiration for the look is an image I have had in my mind for years of Linda Evangelista from the Nineties. She was always bold with her looks and so is Charlize.”

Ruth Madeley at the Bafta awards

Appearing on the 2019 BAFTAs red carpet, Years and Years star Ruth Madeley proved blunt bangs are not only a bold choice, but a brilliant one, too.

Bryce Dallas Howard opted for a ponytail with eye-grazing bangs at this year’s Cannes 2019 red carpet premiere of Rocketman.

Penelope Cruz has been a fan of ultra-short fringes for a while, but she inspired a whole new wave of fans to rush to their hairdressers and demand an above-the-eyebrow cut when she stepped out with baby bangs at this year’s Met Gala.

Supermodel Winnie Harlow’s fringe may look, at first, like a blunt cut, but it’s actually been shaped to follow the curve of her face.

Killing Eve star Sandra Oh recently showed off a new cut with bangs, thanks to celebrity hairstylist Ted Gibson. “Curly haired girls like Sandra can sometimes be afraid of getting bangs because bangs can look a bit askew if they aren’t cut right,” Gibson told American Salon. “For curly hair, bangs cannot be cut blunt and straight across. Instead, they have to be cut on dry hair, and a soft technique must be used to add movement and remove weight from curly hair.”

Mj Rodriguez opted for a Twenties-style bob and short fringe at this year’s Met Gala.