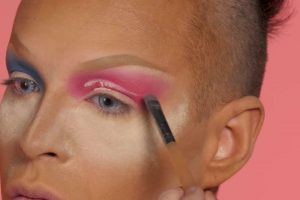 Harley Quinn-inspired looks aren’t hard to find, but if you think you’ve seen the best of the best, think again, please. RuPaul’s Drag Race star Ariel Versace pulled up to Cosmo Queens and showed out with this killer Suicide Squad transformation. This prob comes at no surprise given her flawless skills, but drag isn’t new for Ariel. She’s been in the game for 8 years, and also appeared on season 11 of Drag Race!

“I did theater my whole life and completed my licensing for cosmetology, so when I discovered the world of drag, it was combining two of my biggest passions. I like that I get to create a character and a lifestyle to step into, outside of the norm!”

“I describe Ariel as “New Jersey’s life-sized Bratz Doll.” She’s sexy and colorful. I like my drag to be very aesthetically pleasing, flirty, and colorful!”

When it comes to her looks, Ariel says go big or go home. “I like anything colorful, sexy, and over the top! But I do love when Halloween rolls around and I have an excuse to do more in-depth, specific looks. I did a Jennifer’s Body video last Halloween, which was a tribute to one of my favorite movies.”

The tribute she did to the movie Suicide Squad was so major. Check out the full transformation!