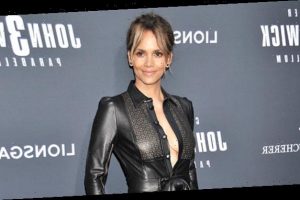 Halle Berry treated fans to a stunning selfie on Instagram while getting ready for a day of filming, and went totally makeup-free.

Halle Berry‘s officially done quarantining, but that doesn’t mean she’s going full glam just yet. The Academy Award-winning actress, 54, posted a stunning selfie to Instagram on October 25 while revealing to her fans that she was getting ready to resume filming on her upcoming blockbuster, Moonfall. And she wasn’t wearing a stitch of makeup while making her announcement.

Officially out of #Quarantine – ready to get to work! #Moonfall here I come!! 🌙

It’s Halle Berry, so obviously she looks breathtaking no matter what she’s wearing or how little makeup she decides to put on. In her latest photo, Halle has a little bit of bedhead, unpolished nails, and lightly filled-in eyebrows. It doesn’t appear that she’s wearing any other beauty products, aside from maybe some great moisturizer. She’s wearing a chunky sweater while curled up on what appears to be her couch at home before heading out for the big day.

She captioned the post, “Officially out of #Quarantine – ready to get to work! #Moonfall here I come!!” Little is known about the Roland Emmerich-directed Moonfall yet, save for the log line: “A space crew travels to the moon after it’s struck by an asteroid and is sent on a collision course with Earth.” The film co-stars Stanley Tucci, Patrick Wilson, and Looking for Alaska star Charlie Plummer.

She may not have been filming, but Halle was still quite busy while quarantining. After posting multiple cryptic Instagram posts that hinted she was spending time with a man, Halle revealed that she was dating “Seconds of Pleasure” singer Van Hunt. Halle and Van, 50, are so close now that they even rock matching protective face masks.

END_OF_DOCUMENT_TOKEN_TO_BE_REPLACED

END_OF_DOCUMENT_TOKEN_TO_BE_REPLACED
We and our partners use cookies on this site to improve our service, perform analytics, personalize advertising, measure advertising performance, and remember website preferences.Ok