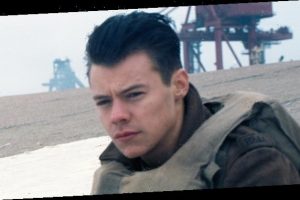 Harry Styles took fans back to 2017 with his brand new haircut! See the actor and singer sporting his shorter ‘do reminiscent of his ‘Dunkirk’ days as he preps for a new film!

Is it 2020 or 2017? In a brand new photo posted by a fan on Twitter, Harry Styles took his fans back in time to just three years ago with his fresh hair style. The a side by side photo showed off the “Watermelon Sugar” singer’s, 26, old hairdo, featuring plenty of waves and curls, juxtaposed with a new photo taken by a fan. The latest pic showed off Harry’s shorter, refined cut, with far less curls and a fine coif. You can see the photo here!

Fans were all about the new look. The admirer who posted the photos even left a caption that was very complimentary to the star. “The way we had a full head of curls a few days ago and now we literally have dunkirk harry again but this time it’s don’t worry darling harry omg omg,” the fan’s emphatic caption read.

It’s true that Harry’s fresh look is quite similar to the one he sported while filming the Oscar-winning film Dunkirk. The 2017 picture, directed by Christopher Nolan, was Harry’s first major acting role outside of the many music videos he filmed for his solo career, as well as previous One Direction hits. Harry portrayed a young soldier named Alex in the critically lauded film. The movie told the story of one of the biggest civilian-led rescue operations in history, where young soldiers were saved by English fishermen during World War II.

After Dunkirk, Harry turned his attention back to his music career. But it was recently announced that the young talent would be making his way back to the big screen! Harry will next star in the upcoming Olivia Wilde-directed feature Don’t Worry, Darling. The burgeoning actor will star alongside Chris Pine, Kiki Layne, Gemma Chan, and Academy Award nominee Florence Pugh.

The film is currently in pre-production, and while little is known about the plot, it’s said to be a “psychological thriller centering on an unhappy housewife in the 1950s,” per IMDb. Given Harry’s refined, classic hairstyle, it looks like he’s already getting into character for the new film! Much like his devoted fans, we cannot wait to see more of the multi-talented star!

END_OF_DOCUMENT_TOKEN_TO_BE_REPLACED

END_OF_DOCUMENT_TOKEN_TO_BE_REPLACED
We and our partners use cookies on this site to improve our service, perform analytics, personalize advertising, measure advertising performance, and remember website preferences.Ok