Hoda Kotb makes heartbreaking revelation about her battle with cancer 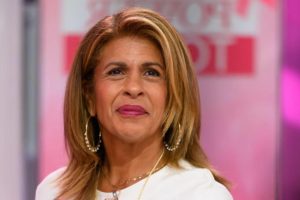 Hoda Kotb knows only too well the agony of a cancer diagnosis having battled it herself and on Wednesday she opened up on Today to share heartbreaking details of her own experience.

The mom-of-two was discussing Hilary Duff‘s new nude photoshoot and they chatted about body acceptance.

Hoda then spoke about how she dealt with her own body after receiving a mastectomy in 2007.

“You don’t realize how long the journey is,” she told Jenna. “I remember really clearly, after my cancer surgery – I did a surgery where it was a mastectomy, but they also did a hip-to-hip incision to do some moving things around – but anyway, I remember, afterwards, having to get washed in the hospital.”

She continued: “I hadn’t seen (the scarring), because I just hadn’t looked at it. A nurse came in to help me and she stood me in front of the mirror, and I was horrified.”

While the surgery had been a success, Hoda wasn’t prepared for what was to come and the journey to acceptance was long and hard.

Hoda opened up to Jenna on Today

“You know when you look, and you’re like, ‘That’s me now?! Like, this is the body for the rest of my life that’s going to carry me through?'” she continued. “You don’t see it as: The cancer is gone. Right then, that moment, you see it as this horrible thing.”

But with the help of other survivors, Hoda was able to gradually change her vision.

“Shortly after I had my surgery, there was a woman who was older, an aunt of my friend,” she explained. “Her name was Harriet. And she said to me, ‘Let me see your scar. I had the same.'”

Hoda hadn’t shown her post-surgery body to anyone but the doctor, but when Harriet revealed her own scars, Hoda felt she could do the same.

MORE: Hoda Kotb opens up about body image in heated debate with co-star

“I remember I did it, and she goes, ‘Now is that so bad?'” the 57-year-old shared. “It was a very poignant and moving moment for me. It was a life-changer.”

Hoda now has two children and says she feels happy

She also credits a former boyfriend for giving her the confidence to feel good about herself too. “That was his purpose, I think, in my life. I remembered feeling not pretty and not worthy, and then somebody doesn’t see the scars. Like, someone looks at you and just doesn’t see that.”

Hoda concluded: “All of a sudden your back is straighter, you feel better and you made it through that hurdle. Now I look at my scars, and I’m happy.”