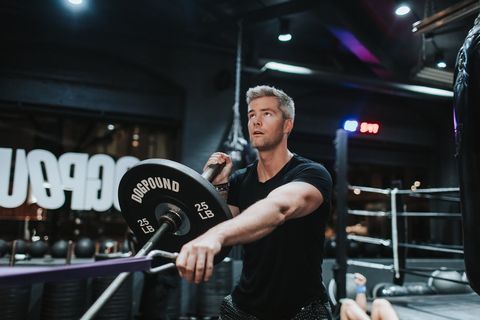 When Million Dollar Listing New York’s Ryan Serhant steps into the Dogpound gym in Manhattan, he has no idea what workout awaits him. Upper body focus? Lower body strength building? High-intensity cardio? It’s a total toss-up, and that daily surprise is one of the reasons he gets out of bed and into the gym by 5:30 a.m. every Monday through Friday.

“It’s good that it changes all the time, and I get to do it with a bunch of other guys — [that] forces me to continue to do it,” Serhant told MensHealth.com.

When you hear Serhant’s name, your first thought probably isn’t a group of dudes slinging weights around. Instead, you’re more likely to envision crisp, tailored suits, vast New York City skylines, and his Bravo TV show about seven-figure condos. The TV star recently released his first book, Sell It Like Serhant, with the hopes of teaching beginner real estate agents how they, too, can go from living in New York’s Koreatown neighborhood without a single suit in the closet to selling $838 million in real estate over the span of a year.

“It’s about helping people learn how to sell, knowing that selling really is a muscle,” he says. The more you work it, the stronger it becomes.

Keeping the Focus on Fitness

That type of thinking is why the 34-year-old is such a fan of the gym. Growing up overweight, Serhant says focusing on fitness helped him understand that he could take charge.

“For me it was just, ‘Oh wow, if I put in the time with these weights, my body can look different,’” he says. “I [realized] that if I ate well, cut out all the chocolate pudding and the cake, and I did workouts that I could find online or get from friends, that I would look better than I did otherwise. And that was important to me.”

Still, with a schedule like his — Serhant wakes up at 4:30 a.m. and immediately starts tackling emails — it’s a wonder his growing to-do list doesn’t get the best of him. His secret to success seems to be a no excuses attitude. “What I have to do during the day has nothing to do with whether I work out or not,” Serhant says. “Working out, to me, is synonymous with eating.”

Once he’s in the gym, Serhant prefers total-body superset routines that work a variety of muscle groups at once. “I like getting things done,” he says. “I don’t like leaving things out; I don’t like forgetting things. There’s a lot of body that I need to work out, so I want to make sure that I hit it all.”

Luckily, those cardio bursts are usually built into his workouts as accessory moves, so Serhant can focus on getting in heavy lifts.

That’s why he’s such a fan of the full-body workout below, designed by Reinhard Nel, senior trainer and trainer development manager at Dogpound. Serhant blasts through routines like this before slipping into that tailored suit and convincing clients that those high-ticket houses are worth every pretty penny.

Serhant and Nel discuss the plan of action for the day’s workout.
Alex Abaunza

To warm up, perform 2 sets each of:

Serhant makes the exercise harder by adding resistance bands to the bar. This teaches acceleration through the movement and makes the lift as hard at lockout as it is at the bottom.