Home » Beauty » “I felt spots rising up through my skin”: the surprising connection between PTSD and acne

“I felt spots rising up through my skin”: the surprising connection between PTSD and acne 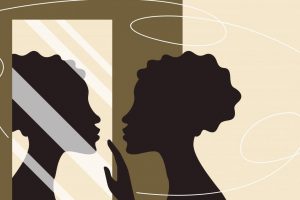 After a traumatic memory resurfaced, Sophie McKay’s skin broke out in the worst acne she’d ever experienced. Here she investigates the connection between PTSD and the wide-reaching impact it can have on our skin.

I always thought I’d been pretty lucky with my skin. But things can change.

At the end of 2020, a memory I’d been repressing resurfaced. Four and a half years earlier, I’d been raped. I never mentioned it to anyone. Instead, I shoved it deep down, leaving it wedged at the back of my mind like a landmine to stumble on in the future.

As I was dealing with this unwelcome new reminder, another change occurred. I lost my flat and was illegally evicted. Things felt like they were falling apart. Then, so did I.

I was in a constant state of high anxiety. I’d suddenly find myself sitting bolt upright and drenched in sweat while watching TV, or hunched over and struggling to breathe working at my desk.

I was too terrified to go to sleep at night. Instead, I paced around the house, checking the doors and windows were locked, clutching a knife. When I started sleeping with a knife, I knew something was wrong.

In the middle of this, and in the space of just a couple of days, my skin blew up into the worst acne I’ve ever experienced. Painful, swollen red spots covered my jawline, cheeks and cheekbones. At night, I felt them rising up through my skin. They frequently formed whiteheads and most ointments only seemed to make them itch and burn.

Despite washing and scrubbing, my skin constantly felt dirty. It felt like the final straw.

Finally, I sought some psychological support and was told I was going through PTSD.

The flashbacks, nightmares and night terrors where I would wake clawing at my face continued for months. But as time moved on, the state of my skin felt like a cruel twist.

As I desperately tried to reclaim my life and entertain the idea of going on dates, I still felt utterly hopeless because of my skin. Every time I looked in a mirror or put make-up on, all I could see was the very vivid evidence of what had happened to me.

Post-traumatic stress disorder, or PTSD, is a mental health condition estimated to affect 5.1% of women in the UK. It can occur after a range of traumatic experiences, including experiencing an act of violence such as an assault or rape, an accident such as a car crash, the loss of a loved one or a dangerous event.

There is a strong and proven link between our mental health and our skin.

There is a strong and proven link between our mental health and our skin. Research cited by the All Party Parliamentary Group on Skin found 85% of dermatology patients said their skin affected their mental health. Similarly, a survey of people with skin conditions published by the group found 98% of respondents had skin problems that were detrimental to their mental health.

There are a number of reasons why PTSD affects skin so adversely.

One of the principal causes is that the stress pathway to the brain interprets the emotional distress from PTSD as a crisis and activates the hypothalamic-pituitary-adrenal axis (HPA axis). This is the main physiological system mediating the body’s stress response. It regulates the release of our endocrine hormones, including cortisol –a major stress hormone. When activated it drives cortisol levels and pro-inflammatory effects, which impact the skin barrier, the immune system and the basic building blocks of how the skin functions.

The far-reaching effects of cortisol can be seen on the skin and they are compounded by the short-term effects of PTSD, such as intense sweating or feeling highly alert. When these things become repetitive, your body adapts to functioning at this consistent level of stress, making it normal for your skin to appear as if it is in a state of distress.

“PTSD is a complicated problem,” explains Dr Alia Ahmed, a psycho-dermatologist who has worked with patients experiencing PTSD. “It makes the skin cells widen, so things can get in and all the good stuff gets out. It can make your skin very dry and drive things like sebum or oil production. It drives the inflammatory pathways.”

Psycho-dermatology has grown in prominence in recent years. A form of dermatology treating skin conditions from both a psychiatric as well as a physiological perspective, it focuses on the physical condition of the skin as well as the habits, emotions and mental health conditions that may be causing skincare issues.

Psycho-dermatologists work by not only prescribing medicines or lotions but also prescribing therapeutic treatments, such as CBT or psycho-analytic therapies.

What’s more, other aspects of PTSD can create other skin problems. Disassociation, the feeling of losing a grasp on reality or no longer feeling connected to yourself, is incredibly common among PTSD sufferers. Individuals can often harm their skin – including skin picking, hair pulling or nail-biting – without realising when having a dissociative attack.

Added to this, it’s estimated that 80% of PTSD sufferers also experience other mental health conditions including anxiety, depression and substance abuse. All of which also affect the skin.

We see clear skin as a standard of beauty, particularly for women. Acne or rosacea can often invite unwanted comments and there are still very few mainstream celebrity figures who present with skin problems. This adds another burden and can exacerbate mental health and skin issues.

“Sometimes how you’re made to feel about yourself can affect your skin,” says Dr Ahmed. “For example, if someone made you feel ugly it can manifest as immense feelings of shame, which can become chronic. This is why, even when stress goes away, someone can still have a skin problem.”

Our skin is our biggest organism, it is our barrier to the outside world. So, in turn, the hugely negative effects from skin problems strip us of the confidence or agency needed to move forward. This creates an incredibly complex situation when it comes to treating skin conditions triggered by PTSD.

For Dr Ahmed, the best way to treat skin affected by this is to tackle both the psychological and the physical effects in tandem. “To me, every patient is a psycho-dermatology patient,” she says. “The first thing is not to be ashamed of talking about it. People change their lives to fit their skin, so if you’ve got PTSD you start hiding away and live with a lot of guilt and shame and feel like they have to endure it.”

A year on, my skin is much improved with the worst of the acne largely under control. This is partly through finding the right skincare products but also through therapy to manage my psychological symptoms.

There are days or weeks when I flare up and wake up to unwanted blemishes. And there are nights when it feels like the old memories are still leaking into me like they’re filling my lungs up with water. I don’t have the same skin anymore, but rather than trying to go back to the skin I used to have or the person I used to be, I’m trying to find a new version of both that I can look at in the mirror and smile.

If you are worried about your mental health or someone you know is, you can find support and resources on the mental health charity Mind, with NHS Every Mind Matters or access the NHS list of mental health helplines and organisations.

If you are struggling with your mental health, you can also ask your GP for a referral to NHS Talking Therapies, or you can self-refer. For confidential support, you can also call the Samaritans in the UK on 116 123 or email [email protected]