In Her New Documentary, Demi Lovato Says Being a Mental Health Advocate Almost Killed Her 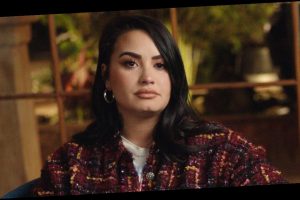 "Doesn't Demi Lovato have that?"

As a psychiatrist who sees college and graduate students, this is a question I am used to answering on a regular basis when discussing a possible bipolar diagnosis with a patient.

Sometimes patients even come in with magazine articles or talking about an interview that resonated with them. They might ask me about symptoms that felt similar to hers and whether what they have been struggling with in silence is, in fact, bipolar disorder.

Either way, for me, Demi Lovato's mental health story made my job just a little bit easier. It took away the fear and the uncertainty, and normalized help-seeking. A study even found that negative stereotypes about people with bipolar disorder decreased after participants were exposed to a TV or magazine interview where Demi talked about her diagnosis. In other words, her story had real, tangible power.

And, it was a story she appeared to tell herself with radical honesty. For example, in her first YouTube docuseries in 2017, Simply Complicated, she discussed her battles with substance abuse and how her breakup from Wilmer Valderamma triggered her relapse with bingeing and purging. It didn't seem like her family or the press controlled the narrative as we've seen with Britney Spears. People didn't joke about it like they did with Lindsay Lohan or Amanda Bynes, or judge it like they did with the Olsen twins. From the outside, Demi was a relatable and authentic role model, showing the complicated realities of mental illness and addiction by connecting directly with her fans. It didn't hurt that her lyrics themselves were basically journal entries of raw emotion sung by one of the best voices of our generation. I mean, have you heard 'Skyscraper' or seen her performance of 'Anyone' at the Grammys?

Watching her new four-part YouTube docuseries Demi Lovato: Dancing with the Devil, which chronicles her near-fatal 2018 overdose and its aftermath, however, painted her mental health advocacy in a new light for me. In the very first episode, it becomes clear that she never chose the spotlight or to be the face of bipolar disorder for herself; it was placed on her shoulders. And that weight was part of her burden that led to her relapse.

As her sister Dallas Lovato explains in the documentary, "It was hammered into her head, you have to be sober, you have to be this icon, this role model, that my sister never claimed to want to be in the first place." Her best friend and former sober coach Sirah says in an interview clip originally from 2018, "It is a beautiful gift to be able to help people but at the same time, you become a martyr in a way that is so isolating and I think it just gets to you." In a more recent interview featured in the doc, she adds that being "the poster child of perfection and mental health…is such a dangerous slippery slope."

Of course, Demi demonstrated that very danger: One month after her six-year sober anniversary, she relapsed and started to use drugs she had never used before, like crack, meth, and heroin, she explains in the documentary. Within three months she had a near fatal overdose, on what she thinks included fentanyl. She even reveals that she relapsed on heroin another time after that.

As a psychiatrist who knows relapse is part of recovery, I never expected Demi to be perfect for the rest of her life, but her team did, and her young fans did. Or at least, she says she felt like they did. "I look at my fans as like family, but because I had been so open and honest about the things that I had dealt with, I felt like I had to be this perfect role model," she says in a 2018 clip featured in the documentary. Even if there should be, there is no nuance in role models or advocacy. The facade that she projected only worsened her shame and guilt.

She couldn't even tell the truth about her own mental health narrative. At 18 (now a decade ago), she was actually misdiagnosed with bipolar disorder. She attributes her diagnosis to being an explanation for her behavior at the time and instead what she needed to do was "grow up." I have seen many people misdiagnosed with bipolar disorder, particularly people who use substances, have ADHD, and people who have personality disorders that might look like bipolar disorder, like borderline personality disorder. This also can happen to women who simply have emotions and mood swings. In fact, one study found that less than half of those diagnosed with bipolar disorder were accurately diagnosed. Demi regrets not getting a second opinion at the time, but says she had already become a recognizable advocate. Thrust onto magazine covers, television interviews, and advocacy organizations representing a disease you actually do not have, how do you, then, "come out" as having your real diagnosis? And if you still want to do mental health advocacy, for example through her work with Talkspace to destigmatize therapy, does this new information affect or alter her good work going forward?

One of the central stories of the docuseries is about her estranged relationship with her father. Demi explains that he was addicted to drugs and abusive to her mother, so they cut him out of their lives. When he died, however, he was alone — she adds that they don't know the exact day he died, though it was around Father's day. She shares feeling significant guilt for being an open mental health advocate, "yet here was my father who had bipolar and schizophrenia and I hadn't helped him the way that I had been preaching." She says he was past the point of her being able to help, but she, again, didn't think people would understand.

Demi isn't wrong as so many people don't understand what it is like to have family members struggle with mental illness. They may never have experienced it or even met someone with a mental health disorder, particularly a severe one. I've seen just how hard it can be to create boundaries to protect your own mental health. But, to the press, their estrangement is a talking point, and to a fan, it could look like she doesn't care, even as it actually tears her up inside.

Demi, the role model and advocate, hid so much of her actual truth behind what seemed like an open book. In this image, she was expected to be perfect, and for her that meant to be sober and an example of mental health and recovery. When she couldn't deliver, she felt shame and guilt and turned that inward. She nearly died instead of being open about her challenges.

"Anytime that you suppress a part of yourself, it is going to overflow at some point, and that is ultimately what happened to me," Demi says, "and it is what led to my overdose for sure."

But we should not expect our advocates to lose themselves for the sake of a cause. As a mental health professional who takes care of healthcare workers this is something I know all too well. When our identity is helping others, we often forget about ourselves in the equation. We only notice our feelings and needs when we haven't slept, it affects our work, we burnout, or worse, are in crisis. Even still, it can be hard to ask for help because it shows a weakness or imperfection. This "hero" mentality sets all of us up to fail.

We need a more nuanced approach. As much as we benefit from role models and people who share their mental health experiences to help others, being an example also takes a toll on them. We need to say that part out loud.

Demi did in June 2018, about one month before her near fatal overdose, in her song 'Sober.' In it she sings, "And I'm sorry for the fans I lost, who watched me fall again. I wanna be a role model, but I'm only human."

Maybe this time we will hear her. I know I do.

Jessi Gold, M.D., M.S., is an assistant professor in the department of psychiatry at Washington University in St. Louis.