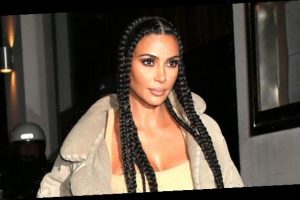 Kim Kardashian looked absolutely sensational in her latest Instagram video where she promoted one of her brands in a stunning outfit!

Kim Kardashian, 39, got a jump start on her holiday weekend by making sure her millions of fans knew about the new line of her KKW lip glosses. The iconic reality star posted an Instagram video on Thursday, July 2, where she showed them off in an outfit that was nothing short of gorgeous to look at. Kim rocked a mesh crop top with high waisted pants that effortlessly put her toned tummy on display. Her stunning black locks cascaded down both sides of her shoulders throughout the video which left one fan making an interesting comment. “No ones looking at the lip gloss let’s be honest,” they joked.

Who has got the new @kkwbeauty lipglosses?!?! Anyone notice we switched to a larger component! I know you guys will love these nudes available now at KKWbeauty.com

It has been quite an exciting time for Kim as of late when it comes to her business and personal life. Her husband Kanye West, 43, recently revealed that the mother-of-four has reached billionaire status following a $200 million dollar deal between KKW Beauty and Coty.

“It’s a huge accomplishment for Kim and something that she absolutely deserves,” a source close to the SKIMS founder told HollywoodLife, exclusively. “Her work ethic is astounding, right from day one. When she first started to get opportunities, she always went above and beyond and just pushed herself,” the insider said, noting, “It’s not something she’s going around bragging about but Kanye brags for her, which is sweet. He’s in awe of Kim and says she’s ‘superhuman,’ because she can do everything at the highest level.”

Kim’s month of June also had a ton of memorable moments with her family. Her eldest daughter North West officially turned 7 on Monday, June 15, where the birthday girl decided to have a cowgirl-themed party in Wyoming that included horses, an ATV and so much more.

Kanye also did a little something magical for his longtime ladylove with a big surprise on Tuesday, June 30.  “So I come home, and my whole bathroom is decorated like an enchanted forest,” Kim could be heard saying on the Instagram story while showing off his kind gesture. “It’s so beautiful, and so visually pretty, and so sweet of my husband.”