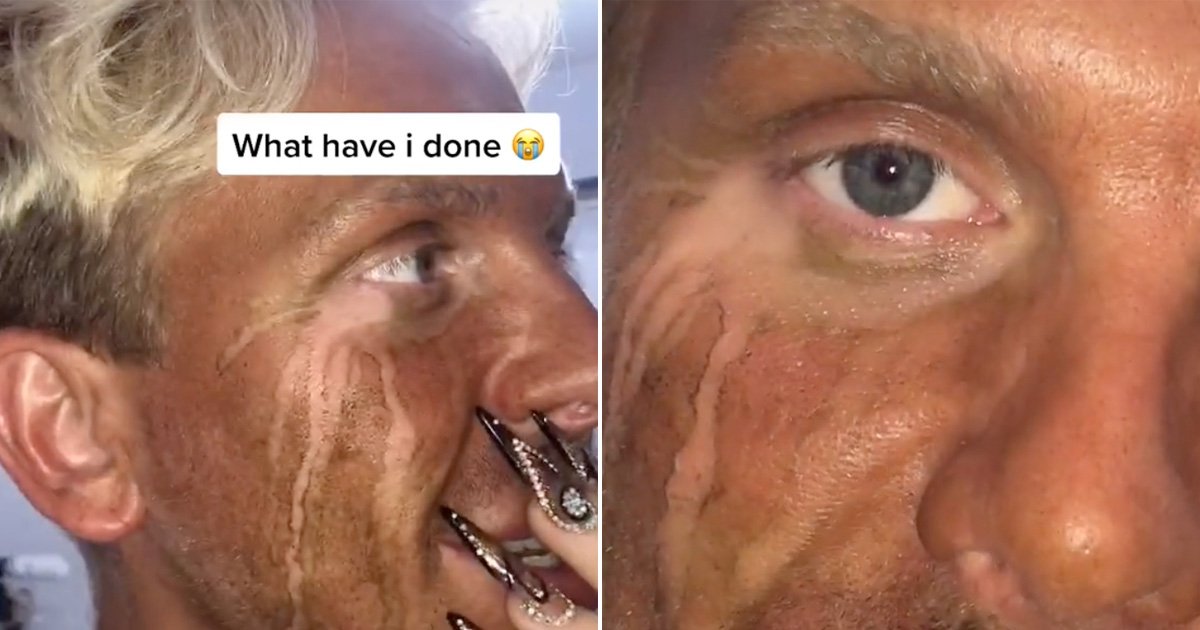 On the label of most tanning products, there’s a warning that says you should avoid water while the colour is developing.

Most of us probably think of swimming, bathing, or vigorous exercise should be held off on, but have you ever wondered how tears affect your bronze?

Makeup artist Josh Reade found out the hard way, teaming tanning mouse and a weepy film, with the results speaking for themselves.

The 29-year-old put his fake tan on before watching the notorious tear-jerker My Sister’s Keepers.

The Jodi Picoult book adaptation stars Cameron Diaz, and follows the story of a young girl whose sister was born with a life-limiting condition.

The drama of the story made Josh cry… a lot. What he was left with the next morning was a deep tan marked by tear stains across his cheeks.

Josh, from Staines, Surrey, said: ‘I was having a little bit of a pamper night and decided to watch My Sister’s Keeper – it’s a very, very sad film.

‘I did the tan, I watched the film and then went to bed. I set my alarm because I was doing a make-up look early in the morning and that’s how I woke up with all these tear marks.

Josh, who lives in Staines, Surrey, posted his fake tan fail on TikTok, in a video that’s now been viewed millions of times.

The St Moritz spray was in a medium shade, and should have been left on for six hours to develop. However, because Josh left his on overnight, it was a little darker than he was hoping for.

‘I put the tan on an hour before I sat in front of the TV,’ Josh said.

‘It says to leave it on for six hours but anyone who’s going to use it is just going to sleep in it and wake up in it the next morning.’

Since the video, Josh has been getting a number of comments and questions from his followers.

He said: ‘I posted it and within 15 minutes I had a quarter of a million views.

‘I’m one of these people who’s always been victimised for being gay and I’m someone who can stand up for myself.’

Thankfully most of the deep colour washed off, with the streaks remaining easily covered up with Josh’s makeup skills.

It’s also not put him off tanning. He said: ‘When I washed it off I looked amazing, I looked like I’d been to Morocco for a week.’