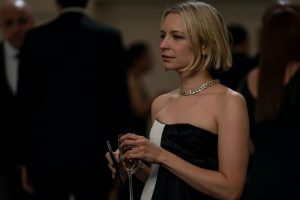 Amid all the drama, this show-stealing haircut breaks through.

If, like me, you’ve committed the beginning of the week to catching up on the Roy family’s general demise, you won’t have missed what I’m about to tell you. Namely, that Kendall’s long-suffering girlfriend Naomi Pierce’s intensely chic, blunt bob is the coolest cut on telly right now.

At the risk of anthropomorphising a haircut, we know this girl: she’s impossibly cool and permanently unruffled; she does little but to great effect. I, and most people I know, have never been that girl and therein lies the attraction.

Naomi, played brilliantly by British actor Annabelle Dexter-Jones, captures the essence of her character in her cut – she’s been a voice of kind common sense to a man in permasearch of a robust identity. She’s been a breath of playful fresh air when Succession’s wont to slip into breakout rooms and brainstorms threatens to overwhelm.

Yes, she isn’t perfect but she is genuinely unbothered by others’ opinions of her. And her haircut matches that energy to a tee.

“I’ve done Annabelle’s hair for different movie roles and throughout our relationship over the last 15 years,” says celebrity hairstylist Ashley Javier. “Our reference was the girl in the How Soon is Now’ music video by The Smiths – she had a really cool bob.

“I showed it to Annabelle and found a way to modernise it with cool nuance that avoided looking ‘mushroomy’ or ‘mumsy.’ It had to be chic and sexy and tough.”

“This bob is different because it is a straight, blunt, tapered length with strong, sharp points in the front that give it a subtle slope. Flappers in the 1920s and the alternative scene in the 1980s were also inspirations for this bob – a revolutionised, modern identity with new equality and rights.”