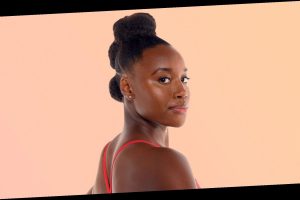 The first word that comes to mind when I think of Olympic gold medalist Simone Manuel is "phenomenal," and it's easy to understand why.

In 2016, the then-20-year-old made history when she became the first ever Black woman to win gold in an individual swimming event, and her hopes were to reach for new heights at the 2020 games.

Then the COVID-19 pandemic hit.

For the first time in history, the Olympic games were postponed, leaving many athletes understandably stunned.

However, now that the world has no choice other than to pay attention to the many human rights atrocities that have long been present, but have only recently began bubbling to the surface again, Manuel decided to use her platform to boost Black voices as well as anti-racist discourse. And Procter & Gamble, at a time when many companies are only practicing performative allyship, is standing in solidarity with the historic swimmer to amplify her message through its Athletes for Good Fund campaign.

"As a Black athlete, I know that it can be very intimidating to feel like you can't use your platform without having some backlash," Manuel tells InStyle. "To have P&G's support is amazing because it really inspires me to speak louder about what's going on in this world. But it also really shows that this is something that's not only important to me, but also important to a corporation like P&G."

There's a lot to be said about the company specifically choosing to work with a Black swimmer specifically, considering the vile history of racism at American pools and lack of Black athletes in the sport as a result.

A few examples: Back in 1964, a hotel manager named James Brock dumped hydrochloric acid into a swimming pool that Black protesters had dived into as a form of protest against segregation, leaving the swimmers with chemical burns. In 2018, a white man demanded that a Black woman show her ID to swim at a private community pool in North Carolina, despite there being no official rules at the time stating that she needed to show any form of identification to enter the area. When she rightfully refused, he called the police.

"There are not many Black people in the sport of swimming, and that is definitely rooted in racism and being excluded from pools," Manuel shares.

However, she believes it's time for the Black community to flip the script. Especially considering the fact that Black children are more likely to drown in comparison to other racial groups, which is exactly why the athlete got into swimming in the first place.

"I'm originally from Houston, Tex., and it's usually hot in the summer," she says. "My parents wanted my two older brothers and I to be able to go to the pool in the summer and be safe in the water. Their goal was to first, not have us be a part of the statistics."

Haircare is another reason why Black people, especially Black women, avoid pools. The chemicals and sea salt found in the water can be damaging to our delicate strands overtime. However, while Black women's hair holds a significant place in our lives, Manuel doesn't want it to be thought of as a hinderance.

"I think it's super important to change the way that we think about our hair," the swimmer shares. "That's something that my mom luckily did for me when I was younger. I think she knew that I was going to be a swimmer earlier than I did, but she constantly [told me], 'Simone, it's just hair.'"

When I ask Manuel about how she maintains her own hair, she's honest in her response, sharing that while she does have to put in a lot of extra work, she would still have it no other way.

"There is a way to take care of your hair and be active," she explains. "It definitely takes work, but I'm someone who genuinely feels that if you want to be successful in something, then sometimes you have to make sacrifices. And for me, part of that is my hair."

In terms of her robust routine, Manuel stays mum when it comes to recommending products, seeing as everyone's hair needs a little something different. However, she does get into specifics when it comes to her cleansing regimen.

"If you're in the water, our hair needs a lot of conditioning," the 23-year-old shares. "That's my general routine."

On Mondays and Thursdays, she gives her hair a good rinse with water, on Tuesdays and Fridays she co-washes. Wednesdays, she will cleanse and condition. While Saturdays are reserved for a full wash day "with the works," she notes.

RELATED: Hands Down, These Are the Best Deep Conditioners for Curly Hair

Although her life may and schedule may look drastically different than the average woman in her early 20s, the level of work Manuel dedicates to her sport, along with everything else she does behind the scenes is never in vain.

Aside from already making history, she's well on her way to becoming not only one of the most decorated Black women swimmers of all time, but also one of the most decorated swimmers of all time — period. Plus, she's got a gorgeous head of healthy, luscious, thick hair that she can proudly sway from side-to-side as she accepts her future gold medals.

So it should come as no surprise that she's just as dedicated to her social justice work as she is to perfecting her breaststroke.

"I just want to continue to try to educate people and speak more candidly about my story and my experiences," she says to end our conversation. "Hopefully to help others with their experiences, but also just to educate others on the fact that we need change and we need to continually and consistently work to be anti-racist."

Clearly, the future is in good hands.

END_OF_DOCUMENT_TOKEN_TO_BE_REPLACED

END_OF_DOCUMENT_TOKEN_TO_BE_REPLACED
We and our partners use cookies on this site to improve our service, perform analytics, personalize advertising, measure advertising performance, and remember website preferences.Ok