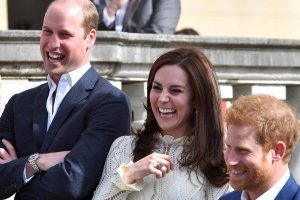 When Prince Harry was interviewed on the BBC back in 2012, he suggested that his sister-in-law Kate Middleton, the Duchess of Cambridge, and brother Prince William, the Duke of Cambridge, would take on the challenge and run the London Marathon the following year in 2013.

Harry, the Duke of Sussex, hilariously made the promise, knowing full well that the Duke and Duchess of Cambridge had no intentions of running the marathon.

SEE: Kate Middleton will never run the marathon for this reason

WATCH: Royals at the London Marathon

“What’s fantastic is my brother and his wife will be doing it next year, I think,” he quipped.

Interviewer Sue Barker replied: “You’ve just said that live on air,” to which Harry said: “He’s going to have to do it now, isn’t he?”

Fans went wild at the prospect of Kate and William taking part in the race, but a spokesman for the Prince said: “Harry’s remark was light-hearted and tongue in cheek. The Duke and Duchess have no plans to run the London Marathon.”

Clarence House added that the comments were made “in jest”.

Fast forward to 2013 and when a volunteer at the event said: “You challenged your brother to run this year,” Harry simply put it down to William being “old” and Kate being “pregnant”. LOL.

“I know, but what can you do? She’s pregnant and he’s getting old. It’s impossible,” he said.

As for himself, another volunteer said: “We’d like to see you running,” to which Harry said: “Oh, here we go… My knee’s bad.”

Prince William himself actually promised he would run the marathon in Kenya, too.

Good Morning Britain’s Sean Fletcher said: “I chatted to Prince William, and he has promised that he will run a marathon in Kenya sometime.”

When Duchess Kate was informed, her reply was just as priceless: “I’ll believe it when I see it,” she said.

Despite all the chat about the royals running the marathon, Kate revealed that it’s not an option due to “security”, but her sister Pippa has previously taken on the challenge, as well as Princess Beatrice.