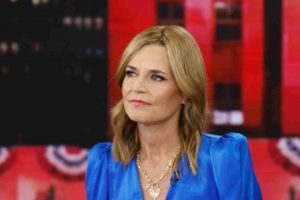 Today Show fans are not seeing the program they are used to watching every morning the week of 28 November, as not only is Al Roker still not back, but Savannah Guthrie is absent as well.

The star was not in her usual seat at NBC studios, and has revealed the real reason behind her absence as being bedridden with what she believes to be the flu.

Not only is she away from Today, but she had to miss the annual Rockefeller Tree Lighting Ceremony, which was meant to be hosted by Mario Lopez, instead of Al, alongside Savannah, Hoda Kotb and Craig Melvin on 30 November.

Savannah took to Instagram to share the unfortunate news with her fans, sharing a photo as proof of her high fever.

The snapshot sees her resting and wrapped in blankets as she holds up to the camera a thermometer, which indicates she has a temperature of over 101º.

In her caption, she wrote: “UGH – flu or something like it since Monday. I’m so sad to miss the tree lighting and TODAY.”

The longtime host added: “Hopefully it passes soon! Miss everyone.”

MORE: Jennifer Lopez poses with rarely-seen sisters – and they look like triplets

Support from fans and co-workers alike quickly rolled in for her, as she maintained that she would still be watching the tree get lit up for the first time this year, even if from bed.

The evening saw performers such as Blake Shelton, Gwen Stefani, Alicia Keys, and of course the Rockettes

Her Today co-host Sheinelle Jones wrote in: “Oh no,” with a tearful emoji, adding: “Love you and hope you kick this soon.”

Her other followers also wrote: “Ugh. Sorry!! Feel better,” and: “Everyone is sick everywhere. Get well soon SG,” as well as: “Oh no!! Will miss you and Al! Feel better soon!” plus another fan also wrote: “Everybody in Manhattan has had it. I hope you shake it fast,” as more detailed their own recent experiences with a cold.