Home » Beauty » Should You Do Burpees Every Day? A Trainer Weighs In

Should You Do Burpees Every Day? A Trainer Weighs In 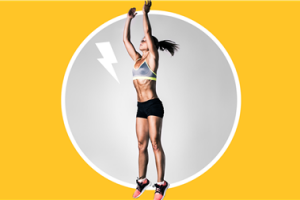 Before we answer the question of should you do burpees every day, let’s have a quick (promise!) history lesson.

Exercise physiologist Royal Burpee coined the move back in the late 1930s. In an interview with Insider, Burpee’s granddaughter, Sheryl Burpee Dluginski, noted that her grandfather created the move while conducting research for his PhD at Columbia. His goal: find an efficient way to measure people’s physical fitness capabilities.

According to Alexis Dreiss, a NASM CPT and certified functional strength coach, Burpee’s test still hits the mark as far as athletic assessments go. “Burpees are a total-body movement,” she explains. “You work through a hip hinge, knee [movement], and pushing motion all in one. You’re getting a true bang for your buck.”

It’s also worth noting that, in Burpee’s original research, the directions to do the move were fairly straightforward (and maybe a bit less sloppy than what you typically see in gyms). Participants were directed to first bend their knees and place their hands flat on the floor in front of them. Then, they were instructed to jump their legs straight out behind them and pause. Finally, participants were instructed to jump their legs back in and stand up to complete the movement, before starting over again.

After each subject (men and boys were originally featured in the research) performed a burpee, they were categorized as “excellent,” “good,” or “not good” as far as their quickness executing the move, post-exercise pulse, and level of breathlessness went.

And while control and accuracy were key factors in executing the move in Burpee’s original outline, there’s a fairly solid chance you’ve seen (or been instructed to do) faster, more furious versions in boot camp classes (with far more flinging limbs). And this is exactly why Roxie Jones, CPT, doesn’t recommend them for beginner clients. “Most people don’t have enough upper body or core strength to do [burpees] correctly,” she says, noting that beginner strength trainers are better off doing push-ups, planks, and squats on their own to start.

That being said, if you can truly master the move, there are a trove of benefits associated with adding burpees into your routine regularly. Below, the benefits of burpees, how to get better at the move, and how to scale it up or down depending on your fitness level.

1. You hit several major muscle groups at once.

As Dreiss notes, burpees are basically a combination of three individual strength moves: a plank, a push-up, and a squat. And within those three exercises, multiple muscles are activated. “You’re hitting everything [in a burpee] from your core to your pectoral muscles to your glutes,” she adds.

Your arms, back, and chest will likely get the most work. In one 2019 study from the Journal of Science and Medicine in Sports, researchers confirmed that participants who engaged in a HIIT-style workout (consisting primarily of burpees) experienced a serious upper-body burn.

2. You’ll get your cardio in quicker.

“When adding burpees to your workouts and doing them in succession, you are doing an aerobic exercise,” Dreiss explains. And given that burpees aren’t traditionally done for long periods at a moderate pace (like jogging or hopping on the elliptical), and are done rapidly for short bursts, they’re typically categorized as a HIIT exercise—which leads to heart health benefits.

Just try to keep your HIIT workouts to once or twice per week, as science has recently revealed that too much HIIT can actually have negative effects.

And since burpees are considered a HIIT exercise, expect to burn through a ton of calories, says Dreiss. A study from 2019 observing exercisers completing either a HIIT or steady-state cardio workout found that those who engaged in the HIIT routine burned three calories per minute, while those who did steady-state burned two per minute. (And while it might not seem like much, those minutes can add up quickly!)

Meanwhile, additional research from The British Journal of Sports Medicine found that those who did HIIT workouts lost nearly one-third more body fat than those who completed moderate-intensity aerobic exercise.

4. The movement requires virtually no space.

One of Dreiss’s favorite perks associated with burpees? The move requires next to no space—and only utilizes your bodyweight.

5. They can be added to most workouts.

While Dreiss notes that you shouldn’t be doing solely burpees for your workouts all day, every day, tacking them onto an aerobic or strength workout (or even pumping a few out midday to get your energy levels up) is a solid choice. “These should be done in moderation and be considered a fun addition to your regular strength and conditioning program,” she says.

How To Get Better At Burpees

While Burpee’s original tutorial is a pretty solid foundation for executing the exercise in a controlled, safe way, Dreiss says that your go-to starting point for getting better involves repeated practice at the main moves contained within each: a squat, high plank, and push-up.

She also notes that, if you’re not entirely comfortable doing a full-on burpee yet, isolating the three strength moves below can be a solid start toward feeling stronger. Dreiss recommends incorporating these moves into your strength routine two to three times per week: 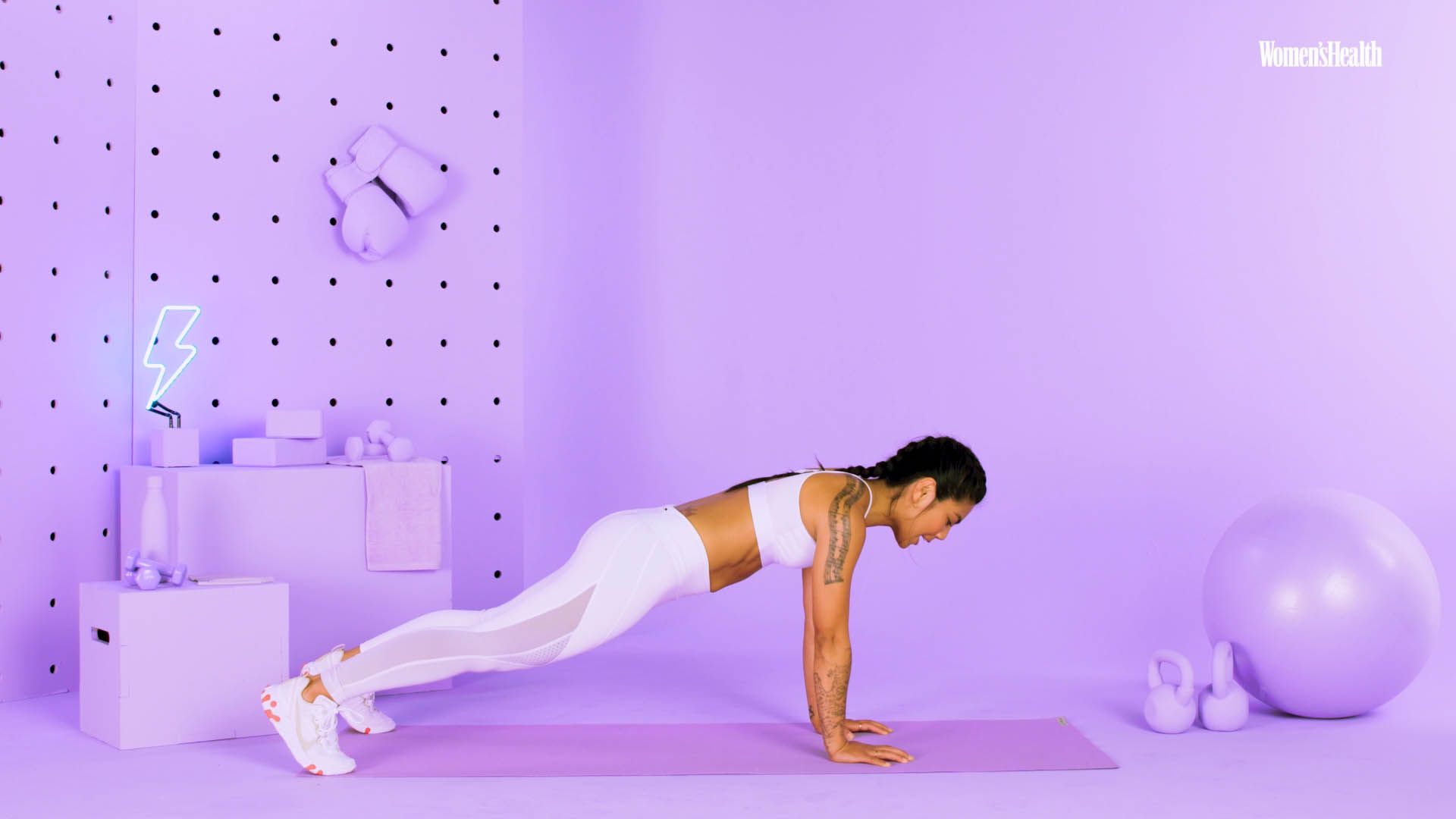 Hold for at least 45 seconds to one minute at a time. Ensure there’s a direct line between your head and your toes, holding a neutral gaze in front of you. Keep wrists directly underneath your shoulders with straight arms.

Perform eight to 10 push-ups for three to four sets. “If you don’t feel comfortable doing a traditional push-up, you can do them on your knees or using an elevated surface,” recommends Dreiss. Ensure your chest touches, or comes close, to the ground, extending your elbows directly behind you and keeping them close to the body.

Perform 10 to 12 bodyweight squats for three to four sets, ensuring “your glutes hit parallel to the floor and your feet are slightly wider than hip-distance apart when setting up,” she says.

As for executing the burpee itself, below are Dreiss’s go-to steps. If you’re confident in your burpee abilities, you can do them at any point of a workout, but note that they’ll tire you out quickly regardless of timing. “Don’t do more than 10 to 12 reps at a time for three to four sets,” she says. 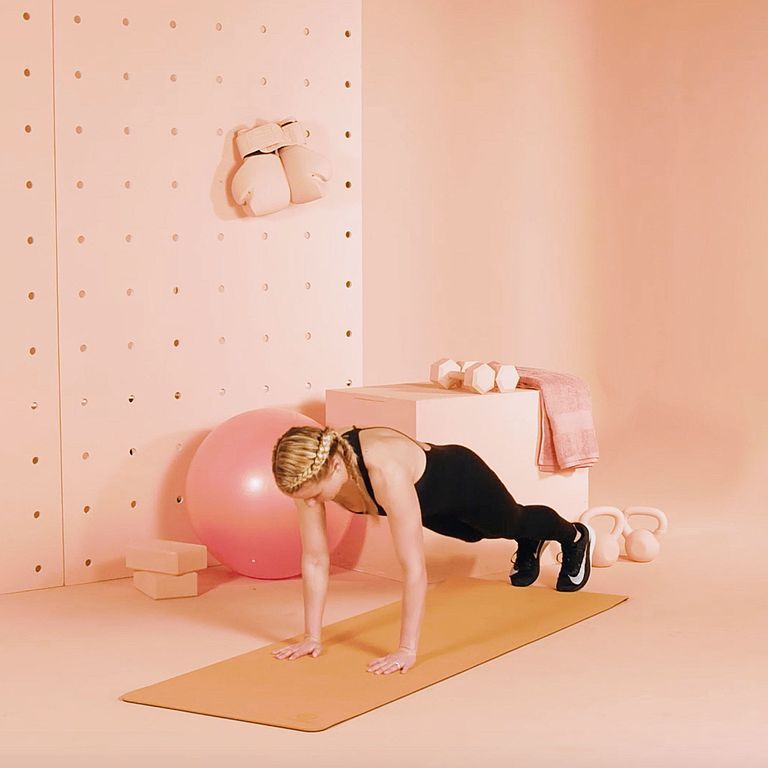 How To Do A Burpee

As for common errors Dreiss frequently sees from clients, those tend to occur at the bottom of the movement, or the push-up. “I see a lot of people collapsing to the ground instead of completing a full push-up,” she explains. “Many times, after hitting a plank, people just completely let go of their core and let their hips sink and chest drop. This is the quickest way to lose out on any pectoral strengthening.”

The simple solution, says Dreiss? “Go back to perfecting that push-up!” 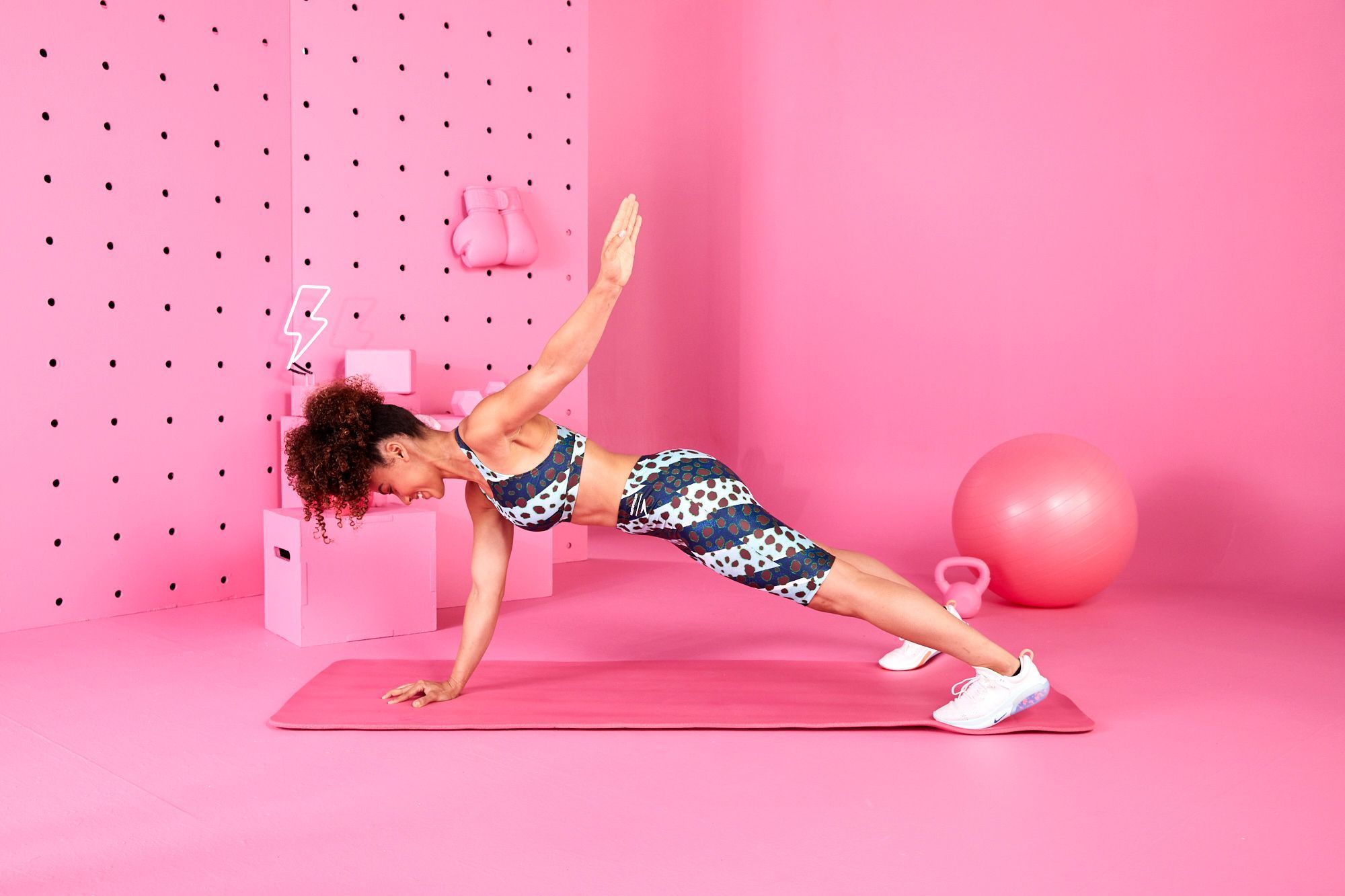 How To Level Up (Or Down) Your Burpees

As Jones reiterates, if burpees just aren’t your thing (which is totally fine), sticking to those three main moves (plank, squat, push-up) can help you build strength without risking injury. But if burpees are your jam (which, go you!), you can always throw in modifications.

Here’s a regression from Dreiss to make it easier: “Instead of doing a full burpee, try a squat thrust instead,” she says. “It’s the exact same flow as a burpee, just without the push-up. I’d also recommend this option if you can’t do a full push-up without going to your knees.”

As for a more challenging variation, Dreiss is a big fan of jumps. “Turn up the volume by adding in a tuck jump at the tail end of the movement, instead of jumping back to standing and starting over again,” she says. “So when you’re coming up off the ground, you jump off both feet and immediately drive both knees into the chest. Land on both feet softly, and repeat the flow of the jump.”

And if you’re a true burpee fanatic, try this 30-day blast for a mega challenge.