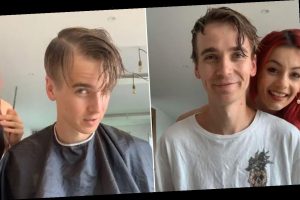 Dianne Buswell put her hairdressing skills to the test on Wednesday when she gave her boyfriend Joe Sugg a fresh new haircut. The Strictly couple shared the process during an Instagram Live – and the end result is very impressive!

Captioning the video, Dianne wrote: “Live haircut on @joe_sugg. Joe let me cut his hair again for the 3rd time winning! Although at the moment he has no other option but it turned out great.”

While the transformation wasn’t a dramatic one, Joe certainly looked a lot more polished by the end of the clip. Telling his stand-in hairdresser Dianne what he wanted, Joe said: “I might go a bit shorter than usual. Short, back and sides.”

He added: “A nice fade around the back and the sides. Take some of the length from on top because it’s getting a big long. I just want to look cool.”

Dianne then got to work, despite the “pressure” of cutting Joe’s hair live, expertly sectioning his hair, trimming it, and even shaving it with a pair of clippers. Nice one, Dianne!

Dianne Buswell did a great job on Joe’s hair

Joe’s actual barber, the London Barber, even commented on the end result, singing Dianne’s praises. He wrote: “Gutted I missed this live BUT well done @diannebuswell you did a great job!” Former Strictly star Dr Ranj joked that he should have quarantined with the couple so he too could have had a haircut. He commented: “Dammit! I knew I should have bubbled with you guys and then you could have cut mine too!”

Dianne changed her own hair up last week, revealing she had chopped her locks off for an important cause. Taking to Instagram, the professional dancer shared a photo of herself laying down on the wooden floors of her home, with her now much-shorter hair on show.

As for the bits of hair that had been cut off, Dianne had placed them around her head so that they spelled out: “Dancers against racism.” Fans were taken aback by Dianne’s post, and took to the comment section of her photo to say so. “Such a powerful message and so creative,” wrote one. “I love this! So powerful and creative,” another noted, while many more simply left heart emojis.

The important hashtag has been trending on social media in recent days, with many dancers sharing selfies of themselves holding up a white piece of paper emblazoned with the hashtag.