Home » Beauty » Tati Gabrielle Does Her Own Hair For Chilling Adventures of Sabrina, and That's Both a Good and Bad Thing

Tati Gabrielle Does Her Own Hair For Chilling Adventures of Sabrina, and That's Both a Good and Bad Thing 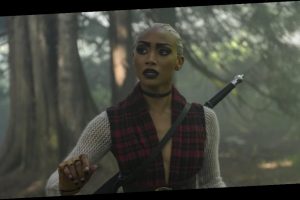 Acting isn’t the only thing Tati Gabrielle is good at. The Chilling Adventures of Sabrina actress has pretty much become synonymous with the icy blond fingerwaves that her character, Prudence, has worn on the show since its debut in 2018, and a recent video she shared via Instagram reveals that she may have conceptualized the Weird Sister’s look all on her own.

On Sunday, Gabrielle shared a time-lapse video of herself on set using a comb and what appears to be gel to achieve her signature style. “Everyone: ‘So who does Prudence’s hair?’ Me:,” she captioned it, alluding to the fact that she’s been the person behind the iconic look this entire time.

While it’s impressive to see that she was able to create a look for her character that’s now become so memorable — and probably had such a huge impact because it was her idea — we can’t help but hope that this isn’t because the production team didn’t take the time to hire any hairstylists who know how to style Black hair. It’s been highlighted many a time that Black people in the entertainment industry are often overlooked on set when it comes to the hair and makeup teams (or, in a lot of cases, the lack thereof) tasked with taking care of them.

Toward the end of the video, Gabrielle eventually gets some help from a stylist to do the back of her head. It’s quite possible that the reason she does her own hair is simply because she wants to, but if that’s the case, we can only hope she’s being properly compensated for doing two jobs when starring in the show at once.