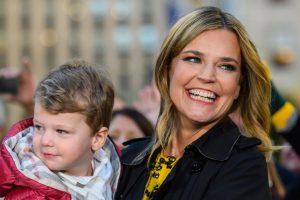 Savannah Guthrie shared how proud she was of her young son Charlie on Wednesday, revealing he had made his own bed.

Posting a picture on social media, Savannah captioned the post: “My little boy made his bed this well and I am prouder than if he hadcured a illness”.

The car bed had the duvet tucked in the sides with a blanket placed at the end and the pillows neatly popped up against each other.

The NBC news star, 50, is mom to seven-year-old daughter, Vale, and son, Charles, five, and the family recently jetted off to the Bahamas to celebrate the couple’s eighth wedding anniversary.

However, they weren’t alone, as joining them on their special celebration was her co-star Jenna Bush Hager, with her own family in tow, consisting of husband Henry Hager and three kids, Mila, Poppy, and Hal.

Wednesday was an emotional day for the TV star as earlier she had shared a heartwarming video from earlier that day when she and Hoda Kotb were joined by Ryan and Brittany McGuire at the Today Show studios.

Savannah shared how proud she is of her son

Brittany and Ryan are siblings who became TikTok famous as they spread autism awareness; Ryan, 28 has autism and he shared that people are finally “learning what autism is and how I want to be treated”.

But he was in for a big surprise, as his favorite basketball player, the New York Knicks’ Derrick Rose left him a signed shirt and a personalized video inviting him to the Knicks game on Wednesday night.

Savannah shared the video with fans

“I love it, that’s my boy,” exclaimed Ryan, with Hoda joking: “Make aTikTok.”

“This was absolutely the best. I follow them on TT. Love the honest funny positive vibe. Go Ryan Go!” commented one fan, as another shared: “What a special bond these two have and it’s wonderful they are making people aware of autism.”