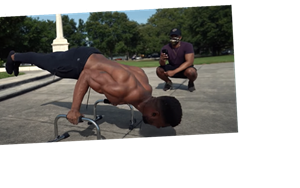 Attempting to break world records is one of the hottest fitness trends on YouTube right now. Pro climber Magnus Midtbø recently attempted to break a bunch of pullup and chinup rec0rds, and Stan Browney has attempted to break (and maintain) a 30-second pushup record over a whole series of videos. Now, Austin Dunham decided to get in on the action with Planche pushups.

After some research, Dunham learned that a man named Temur Dadiani held the record with 36 reps. He also learned that Dadiani was a double amputee. Dadiani’s record is incredibly impressive, and Dunham knows that he would be highly unlikely to break it. So he set a goal for himself to attempt half of the current record, meaning 18 reps of full Planche pushups. Dunham is also using parallettes, which were not featured in the other attempt.

After warming up, chalking up, and kicking off his shoes, he goes for it. And he did a lot better than he expected, repping out 24 Planche pushups.

“As I mentioned in the beginning, I’ve trained Planche pushups. But I didn’t train specifically for this test,” says Dunham. “And to be honest, I think that’s the first time hitting above 10 reps in one single set. If you think about it, that’s an endurance standpoint. It’s no longer a strength exercise for me. So if I really bog down and train for it, I feel like I can hit at least 25 to 30.”

Dunham says that he wad 5’11” and 174 pounds the morning of the attempt. He says that his ideal weight for Planche would be 165 to 170 pounds, which may have prevented him from performing at a max level.