Home » Beauty » What drinking booze actually does to your skin

What drinking booze actually does to your skin 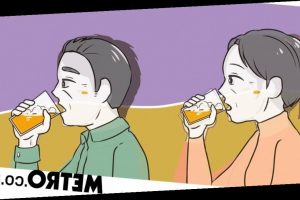 We know full well that drinking a load of alcohol isn’t very good for us, physically, financially, and mentally.

And we know that quitting the drink can thus deliver a lot of benefits.

Despite this, still we sip. So perhaps we need another reason to go dry beyond January – or at least damp, rather than drenched.

Here’s that nudge you needed: drinking booze isn’t just bad for your insides, but your outward appearance, too, as it wrecks your skin in a number of ways.

Yes, that’s even if you only go big at the weekend, or only have the occassional glass of wine.

If you’re investing loads of time and energy towards your skincare, then downing shots or slurping up cocktails, you’re pretty much wasting both.

But don’t panic – there are ways to lessen the damage.

Let’s break it down.

What effects does drinking alcohol have on your skin?

First we’ll cover the short-term impact – from the moment you start drinking to the hangover the next day.

That’ll be redness, blotches, and dryness.

‘The skin will be more flushed than usual, as alcohol is a vasodilator, causing blood vessels beneath skin’s surface to become dilated,’ explains Emma Coleman, a dermatology and aesthetic RN. ‘Inability to break down and digest alcohol consumed in large volumes can be another possible cause of facial redness with a hangover. Alcohol is also highly dehydrating as it is a diuretic, causing us to pee more frequently.’

Those are the direct results of drinking, but there are also less obvious effects.

Getting hammered often involves getting sweaty – whether you’re out dancing or in an overheated pub. Leave sweat and grime to sit on your skin and you’re asking for clogged pores and breakouts. Come home drunk and fall asleep with your makeup on, and you’re letting a pretty grim concoction settle into your skin overnight.

Then there’s the impact of having a late night or fitful rest. We know how important sleep is for our skin’s appearance – there’s a reason it’s called beauty sleep. Mess with sleep, even for a night, and you’ll mess with your skin.

‘After a poor night’s sleep, dark circles and puffiness or breakouts frequently appear in the short term after drinking, with a more dull appearance to our skin than usual,’ says Diane Ackers, skincare expert for Doctors Formula.

Then we get into the longer-term impact of regular boozing. It’s not good news.

If you’re regularly reaching for a tipple, expect premature ageing, a dull complexion, and an uneven skin tone.

‘Alcohol is literally sucking the moisture out of the skin, but as the alcohol metabolises in the liver, a toxic byproduct is produced and released into the body and skin,’ explains Diane. ‘This then causes the dehydrated tissue, which ultimately can lead to more lines, wrinkles, loss of luminosity and an increased anti=inflammatory response.

‘Often we also see additional issues with long term drinking, such as skin redness, puffiness, broken capillaries and skin that most definitely ages more rapidly than it should.

‘Experts believe that excess alcohol over long periods of time can have irreversible effects on the skin.’

Emma notes that ‘skin diseases such as certain types of eczema, psoriasis, rosacea and dermatitis are more common in heavy, longterm drinkers’, too.

What about if you’re just a weekend drinker?

It’s easy to think that as long as you’re not a diehard drinker pounding beers every evening, you’re safe from alcohol’s damaging effects.

That’s not the case. Sorry.

Even those who only have the occassional binge, rather than being ‘regular’ drinkers, might still see an impact on their face.

Diane adds: ‘If it’s a weekend blowout or a nightly “chin- chin”, the effects on the body are the same.’

How can you treat the skin damage caused by alcohol?

The obvious way to put a halt to the negative effects of alcohol is to stop drinking it.

But that’s not your only option.

If you’re determined to keep drinking, just take some precautions and couple these with proper skincare treatment to counteract alcohol’s effects.

The key to prevention is hydration.

‘Before you go out, avoid caffeinated drinks,’ recommends Emma. ‘Alternating each alcoholic drink with a glass of water will help to combat skin dehydration.’

You can also consider swapping your spirits – Emma tells us: ‘White wine and prosecco have strong links with rosacea, psoriasis and accelerated aging. Opting for light coloured spirits diluted with tonic can help to reduce the impact.’

The post-booze aftercare is important, too.

‘After your splurge, drink a warming cup of tea – ginger & lemon, mint or turmeric are all great before you sleep to give your liver a helping hand at flushing those toxins away,’ suggests Diane. ‘Take a few deep breaths and calm your mind, as a good night’s sleep aids in recovery, reduces the dark circles and tomorrow’s irritability from lack of sleep.

‘Whatever you do, don’t go to bed with your makeup on. Think of the all the bacteria you’ve gained on your skin, don’t let them breed on your skin overnight and get comfy in your lovely linen.

‘Wash the night away and apply an intense hydrating or repairing serum such as a probiotic overnight repairing serum and a skin boosting moisturiser rich in hydrating ingredients, such as marine collagen and antioxidants to help skin through the nighttime recovery process.’

In terms of skincare products, you’ll want nourishing items with antioxidants such as vitamin A, C, and E, and niacinamide, which helps to reduce redness and encourage rejuvenation. Make sure to load up on these the morning after drinking, especially.

To tackle lasting damage, cosmetic treatments such as laser therapy can help to increase cell turnover.

What effects does going sober have on your skin?

Quitting alcohol will mean you steer clear of all the booze-related skin issues we mentioned above, and you’ll notice the results pretty quickly.

Even just sticking to Dry January could make your skin look significantly better.

‘Dependable on your age, and volume of alcohol consumption, most people are likely to see improvement within approximately 6-8 weeks.

‘It’s hard to reverse the signs of many years of alcohol, but, given time to respond and with a little help and coaxing from your skincare routine, your skin delivers.’