What Happened When These Bodybuilders Tried Old School 1940s Exercises 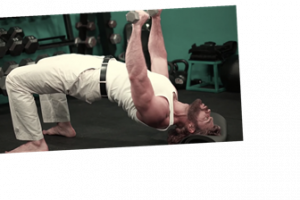 Fitness YouTubers Buff Dudes (brothers Hudson and Brandon White) decided to take their training back a few decades after picking up a 1940’s bodybuilding magazine and deciding to do a full workout based on 10 moves from the era.

Almost all of the moves are clearly from the past—and it’s not just because fitness gear has evolved over the past 80 years. “I’m a little nervous, I have to be honest. Some of these exercises look a little scary, and maybe compromising,” says Brandon.

But they go for it anyway for the sake of their viewers’ entertainment.

Unlike standard biceps curls, the ’40s version requires you to hold the dumbbells in each hand with your arms straight out, making a T shape. “A little bit like a crucifix that you’ll see on a cable machine, except this one doesn’t offer nearly as much resistance,” says Hudson as he demonstrates the move. “It’s all tendon, baby!”

This move breaks one of the cardinal rules of squatting: keep the weight back in your heels. “It is a leg-based exercise that’s essentially a squat, putting the dumbbells on the shoulders,” says Brandon. “You’re squatting down but what’s happening is you’re going on the balls of your feet with a completely upright torso and pushing straight up. I hear some snap, crackle popping going on. Definitely a lot of stress in the quads and the knees.”

This move totally mimics a German military march while holding a barbell.

“With this you’re working the hip flexors, bringing the legs up, maybe a little bit of the abdominal, but I don’t know what the barbell is for other than for some balance issues,” says Brandon.

This is the one move they found that is still in use, but it’s not doing that much.

“With punching, you’re going to have a lot of leg, hip drive,” says Hudson.

“I’ll tell you one thing, you do feel it more in your bicep with the supinated grip, and maybe in the front delt too,” says Brandon.

With a wide stance, you take a barbell and swing it from side to side.

“A lot of twisting, a lot of shoulders in there, and it looks like an acrobatic type of movement,” says Brandon. “You can probably do a lot of spinal damage.”

Adds Hudson, “Maybe since a lot of Strongman started in the circus, maybe that’s where this had its origins?”

“A lot of stress on the neck, your cervical spine… which can obviously be very dangerous,” says Brandon. “I would say, never try this exercise. Ever. Adding the pressing and weight to that motion is only going to add a lot more stress to your neck, and that is very dangerous.”

You do this one without a rope, and add in a barbell.

“I would call this a spine compression exercise,” says Brandon.

“It’s kind of like a stiff leg deadlift in a way where your legs are locked out. Your legs are extremely bent, and you’re going from side to side,” says Brandon. “This is probably high up on the danger scale.”

“These twisting movements are really getting to me,” says Hudson.

“Now THIS is cardio!” says Hudson. “It kind of hurts my shoulders and arms. The weight is just pulling on it. It’s crazy… and my neck! Other than compress my shoulders and neck, it doesn’t really do anything.”