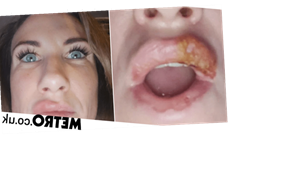 Gemma Palmer, 35, was no stranger to lip fillers, having had them injected in August 2017 with no problems.

However, the mum-of-one found herself on the end of a medical emergency after going back for more in October 2018.

Support worker Gemma went to a local beautician and paid £180 to have her lips injected with a full millilitre of lip filler – double her usual dose.

But rather than the smooth and even way her lips had been plumped before, the liquid gathered together on the right side of her top lip throughout the following week, leaving her lopsided with a swollen and painful mouth.

Gemma could only eat soup due to the severe pain, and she knew something was seriously wrong.

After the reaction, she had the filler dissolved, and was pain-free for eight months until further complications caused her lip to burst five times.

Despite the dissolving she’d had done, Gemma felt her lip becoming hot and painful, before doubling in size and then bursting multiple times.

Gemma said: ‘I was at home cleaning when I felt a burning sensation and throbbing in my lip.

‘I knew it was about to flare up again but hoped it would be ok by the morning – how wrong I was!

‘I woke up and my lip had swollen up so much that I could hardly speak.

‘It carried on swelling over the next couple of days until it finally popped open which was both disgusting and extremely painful.’

Gemma visited her local GP surgery but despite telling them about her previous problems with lip fillers, her issue was dismissed as a cold sore.

Sent home with antiviral tablets, the lip slowly cleared up over the next few weeks, but the problem has come back every few months, and Gemma has now suffered with her lip swelling and exploding five times – most recently in March this year.

‘The pain gets more extreme every time and this time round has definitely been the worst,’ said Gemma.

‘My whole mouth filled with blisters from the swelling which kept popping and filling my entire mouth with blood. I couldn’t eat, I was in constant pain.’

Gemma has now visited cosmetic surgery specialists, who told her they reckon some of the lip filler is still trapped inside her face – a full two years after she had them done.

The Litherland, Lancashire mum is awaiting specialist treatment to have it removed, and is warning other women of the dangers of fillers.

Gemma said: ‘It was horrific, I was in so much pain both physically and mentally.

‘My lip made me cry and I was so upset both before and after my lip exploded as the pain and the swelling affected my everyday life.

‘I was really scared and worried when my lip exploded – I was so anxious that it could leave me disfigured for life.

‘Altogether, I’ve had about six weeks off of work because of the lip filler problems.’

The next step for Gemma is to have the remaining filler dissolved, which will be coupled with a course of antibiotics to hopefully stop any further reactions.

‘Hopefully this will be the last time it happens,’ she said.

‘I’ve been in agony for two years because of these problems and I just want other girls to know the danger of lip fillers before they go ahead and get injected.

‘I do feel deep regret and I wish I had never had them done.’

Do you have a story you want to share with us?