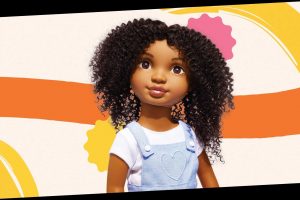 Entrepreneur Yelitsa Jean-Charles, CEO and Founder of Healthy Roots Dolls, distinctly remembers two pivotal moments during her childhood when she saw her hair as magical. The first: Brandy’s 1997 portrayal of Cinderella.

“I would regularly watch Brandy as Cinderella and think she was so beautiful. Brandy had the braids. She was always on point,” she says. “But for most of my life I didn’t feel that way [about my hair] and I often pushed back against the braided hairstyles that my mother would take so much time doing with my hair because I was like no, I wanna press it, I wanna straighten it, why can’t it flow down my back, don’t bump the ends!”

The other moment: When her 16-year-old cousin coaxed her hair out of freshly done braids into a big fro to match Scary Spice’s from the Spice Girls.

Still, Jean-Charles’ recalls feeling pressure from a young age to appeal to Eurocentric beauty standards. “We’ve been conditioned to believe that our hair is difficult,” Jean-Charles says. “And our hair is not difficult. We’re just being difficult on our hair.”

It’s those memories that inspired her to start her company, Healthy Roots Dolls, to help the next generation of Black women discover self-love and self-expression through their curls.

The process of designing, developing, and releasing Healthy Roots Dolls has been anything but child’s play.

The design for the company’s first doll, Zoe, began as a class project during Jean-Charles’ junior year in the illustration program at Rhode Island School of Design, where she redesigned the character Rapunzel with brown skin and long coily hair.

Then, the idea for Zoe evolved into a fully-funded Kickstarter venture to produce a doll inspired by that illustration. The current doll, now available online, is the result of five-plus years of bootstrapping, raising capital, and building a devoted, loyal audience. Fast forward to 2021, and Zoe has even gotten star-studded endorsements, including from Serena Williams’ husband, Alexis Ohanian.