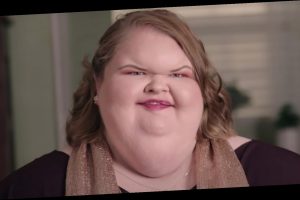 TLC’s 1000-lb Sisters has quickly gained a following in just two seasons. The saga of Tammy Slaton and her sister, Amy Slaton Halterman, has resonated with viewers who are rooting for the sisters to reach their personal dreams and meet their weight-loss goals. This season, Amy had much to celebrate: In addition to undergoing gastric bypass surgery to help her reach a healthier weight, she and husband Mike welcomed a son, Gage Deon, in November. She also revealed that she hopes to have another child, preferably a girl. She’s also taking better care of her health, giving up her favorite sodas in favor of more nutritious sweets like pineapple.

Tammy’s journey hasn’t been as successful. At 665 pounds, her weight is literally threatening her life. However, in order to qualify for weight-loss surgery, she needs to lose enough weight on her own to make the operation less risky. It’s an uphill battle for the reality star, made more difficult by her habit of making less-than-optimal choices. Her boyfriend, Jerry, didn’t make it any easier. Season 2 saw Tammy’s family chastising him for bringing fast-food meals to Tammy. Making matters worse, Tammy contracted COVID-19 and was hospitalized for breathing problems. How did all this impact her efforts to get healthier? A look at next week’s episode provides a hint.

Tammy realizes why she hasn't been losing weight

In a preview clip of the March 8 season finale, we see Tammy and brother Chris meeting with Dr. Eric Smith about her progress (via People). Both siblings are discouraged to see that, far from dropping pounds, Tammy is actually 21 pounds heavier since her last weigh-in. “I could understand a pound or two, but every time she steps on the scale, she adds 20 pounds,” Chris tells the camera, adding that he feels he’s “failed as a diet buddy.”

Asked by Dr. Smith to think about why she’s continuing to gain, Tammy honestly replies that some days are easier than others. When she gives in to her “what the heck’s the point?” moments and makes poor food choices, she says she feels “even more depressed, because I know I shouldn’t sit there and eat it all, but I do, and I don’t know how to stop.” Dr. Smith sees this as a breakthrough, and praises her for not trying to blame her weight gain on anything other than her own decisions. He suggests that once she begins dealing with her problem as an addiction that needs help, she may be able to make real progress toward losing enough weight for surgery.

Tammy hasn’t mentioned anything about her progress on social media recently — perhaps because of contractual obligations with TLC — but she did recently share a new hobby that isn’t food-related. On her Instagram account, she presented a video of colorful glitter artwork and a wooden jewelry box she’s been painting.