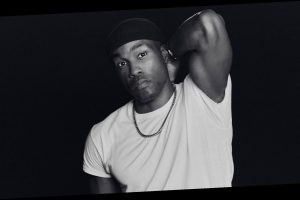 It’s the first thought that occurs during our Zoom call in early September, just weeks before he would win an Emmy for his role as a literal god in HBO’s Watchmen. Even amid what’s undoubtedly a long press day for him to promote the highly-anticipated Candyman sequel, Abdul-Mateen II is strikingly present, and prone to saying things like “I appreciate you” — even if he’s the one indulging your questions, and even if a full press junket means you only get 12 minutes together. When it comes time for the (virtual) photoshoot, he glides seamlessly into his angles and poses, giving us an array of flawless shots in just 10 minutes.

The day after our conversation, director Nia DaCosta announced that Candyman, like most other movies with 2020 release dates, is to be delayed until 2021, but Abdul-Mateen II himself still has a busy schedule ahead of him. He’s currently in Berlin filming The Matrix 4, which he can reveal nothing about, except that he really likes everyone involved.

The actor has been on a whirlwind career streak since finishing his MFA at Yale School of Drama in 2016, having gone from the graduation ceremony right into his role as disco prince Cadillac in Baz Lurhman’s Netflix series, The Get Down. From there, his IMDb credits continued stacking up, as he donned spandex to play a circus performer alongside Zendaya in The Greatest Showman and strapped on a super suit as Aquaman’s villainous Black Manta. And that’s not to mention a guest spot on The Handmaid’s Tale, an appearance in Jordan Peele’s Us, and a stellar turn on Black Mirror before captivating fans and critics alike in Watchmen. He’s only recently begun to take the time to soak in the fruits of his labor. After Emmy nominations were announced, Abdul-Mateen II shared a video of himself reacting in real-time to the news that he was a nominee. The result is 20 seconds of sheer, unbridled, contagious joy.

“For the couple of weeks leading up to it, I let myself be excited about the possibility of being nominated for an Emmy,” he says. “But the day [of], I really put all of the expectations out of my mind and went along for the ride. When I saw my name, I was incredibly excited. And then there was a lot of gratitude for the creators, and gratitude towards the fans of the show, and to share that nomination with other actors who I really admire and looked up to — it really, really meant a lot to me.”

This is a thing Abdul-Mateen II does a lot: give credit where it’s due, and share his accomplishments with the people around him. When he eventually won the Emmy, he used his speech to shout out his hometowns of West Oakland and New Orleans as well as thank “all of the Black women in my life,” who he called his “early investors.” He recognized Watchmen’s cultural importance as a story about “the lasting scars of white domestic terrorism.” His path, it seems, has been paved by consistent acknowledgements that his success is bigger than even him.

To that end, he’s open about trying to be, as he puts it, “more conscious” about the work he puts out into the world. Nowadays, he’s drawn to characters that are grounded in the responsibilities they take on, or the narratives they represent. That inclination is clear in his roles in both the Candyman reboot — which touches on themes of gentrification, white violence, and Black pain — as well as Aaron Sorkin’s The Trial of the Chicago 7, in which he plays Black Panther Party co-founder Bobby Seale.

“I grew up in Oakland, California, I knew of Bobby Seale growing up,” he says. “To portray a character in a situation where all the odds were against him, and yet he chose to be righteously defiant, and to not show a fear, to not show defeat in the face of one of the largest oppressive forces at the time in the world — I thought that showed a lot of courage.”

Like many of us, however, the slowed-down state of the world amid the pandemic has given Abdul-Mateen II the chance to stop and take stock of where he is.

“The thing I remind myself of now is that I'm not going anywhere,” he said. “I'm already there, this is the destination. I consider myself an ambitious person, so sometimes it's easy to not be present, not acknowledge where I am, and to say, OK, well, I can't wait till I get to this next place. But this year has really reminded me to be where I am and smell the roses along the way. I'll always be working and looking forward, but now I have that other gift, which is the reminder to be appreciative of everything I have. So that's where my head is recently.”

Read on as Abdul-Mateen II discusses his ideal day off, his dream travel destination, and the slogan he’d steal if he ever ran for office.

What is the last thing you do before you fall asleep?

I say my prayers and I probably text my mom.

Who is your favorite villain?

What's the first album you ever owned?

Do you still listen to it?

Oh, yeah. I listened to that maybe two weeks ago.

If you were required to spend a thousand dollars today, what would you buy and why?

I would take my cousin shopping and probably get him some shoes — get us, like, a matching pair of shoes and then go out. We’d have a really expensive dinner and have some expensive cigars. And I don't think that would cover a thousand dollars … With the rest, I probably … I don't know, what would I do with the rest? Maybe buy some T-shirts, you can never have too many T-shirts. If you ran for office, what would your slogan be?

Who would you choose as your running mate?

Oh my gosh. I will choose one of my four sisters. They're dynamic women, extremely talented, they're hard working, smarter than me, and they got my back. So I would definitely pull one of my sisters into the ranks.

What’s one place you've never been, but you've always wanted to go?

I've always wanted to go to Nigeria. I've been around a lot to West African families and Nigerian families, and they all tend to feel like my family in New Orleans in the way that they celebrate an occasion, celebrate life, and celebrate one another. I think I'd like to have a warm welcome in Nigeria.

What's the first thing you'd do when you got there?

Look for food and I'd change my wardrobe.

What is the most uncomfortable outfit you've ever worn?

Probably a harness for one of my jobs. Maybe the spandex in The Greatest Showman was probably the most uncomfortable — the spandex and the soft leather boots, the tights. What is your favorite bagel?

I like to do a plain bagel toasted with a fried egg and smoked salmon.

What is your go-to cologne?

Name a movie that made you want to be an actor.

Yeah, but that's not when it inspired me to be an actor, I was probably already performing when I went and revisited for a second time. But that's one that I can always watch, and it gets me back on my A-game or back towards my A-game. So that's a movie I use to calibrate myself.

It depends, sometimes it's just resting and watching basketball or hanging out with my family, eating good food, laughing a whole lot and just chilling. Because when I go [to work] I'm pretty much always on. So when I'm off, I like to eat a good, big breakfast, spend some time outside in the sun, not have commitments. And if we could put some basketball in there, we can put some comedy in there, some good laughs, then enough time to wind down at the end of the day, that's a good day off. Do you have a favorite onset memory?

Yeah, my favorite onset memory is about 10 days after I walked the stage at Yale, I was shooting my first big scene on The Get Down. I was first shooting the Les Inferno big dance number and to be on that stage with Baz Luhrmann and in my costume, my wardrobe, and I'm a well-oiled machine straight out of school and got Baz slamming on the microphone and he's just saying the most motivational, inspirational things. And next thing you know, I got the big crane camera coming towards my face and it's time to go. So that's how I entered into this space, and I’ll never forget it.

The Trial of the Chicago 7 premieres on Netflix on Oct. 16.

We like This Guy — and you should too. Meet the men of the moment, the ones whose names will become as integral in your social vocabulary as “Chalamet” or “Keanu.” And yes, we have photos.

END_OF_DOCUMENT_TOKEN_TO_BE_REPLACED

END_OF_DOCUMENT_TOKEN_TO_BE_REPLACED
We and our partners use cookies on this site to improve our service, perform analytics, personalize advertising, measure advertising performance, and remember website preferences.Ok