Home » Celebrities » 16 details you might have missed in ‘Harry Potter and the Deathly Hallows: Part 2’ 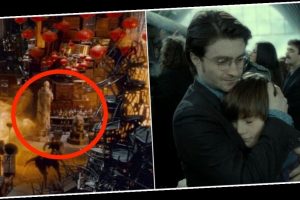 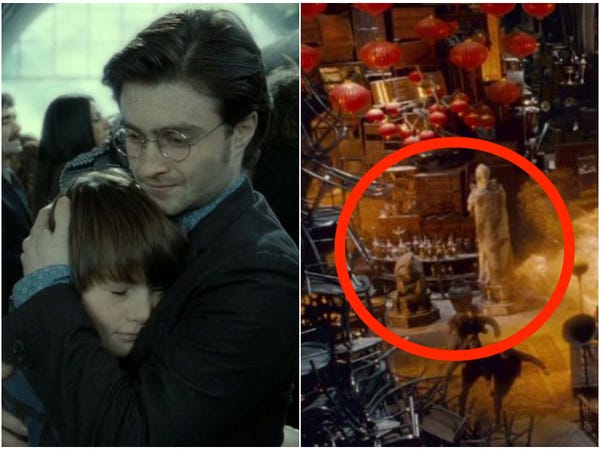 J.K. Rowling's "Harry Potter" series — which has recently been reexamined in new cultural context after the author's so-called 'TERF' statements about the trans community — still remains one of the most popular film series of all time.

"Harry Potter and the Deathly Hallows Part 2" is the epic conclusion to that film series, and features easter eggs and behind the scenes facts that even the most dedicated Potterheads might have missed or may not be aware of.

From the potential casting of Oscar-winner Kate Winslet to "The Sorcerer's Stone" chess pieces making an appearance in the Room of Requirement, there might just be something you missed. 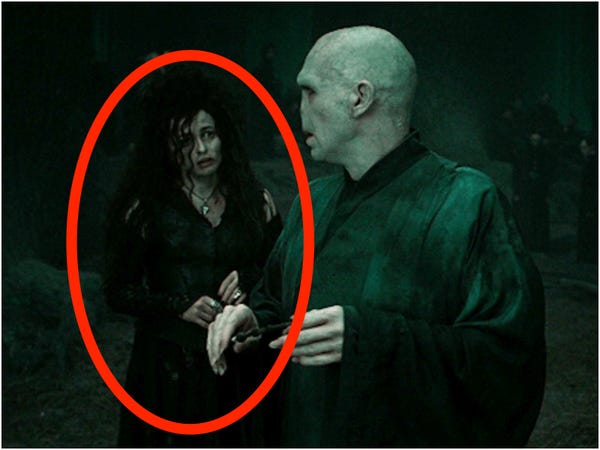 If you go back and watch each scene featuring both Helena Bonham Carter's Bellatrix and Ralph Fiennes' Voldemort, you'll notice that Bellatrix always moves to stand on Voldemort's right hand side. This is typically the position that the most loyal and trusted follower takes, so it makes sense that she would position herself accordingly.

In the Room of Requirement scene, you can see the knight that Ron rides in the first movie 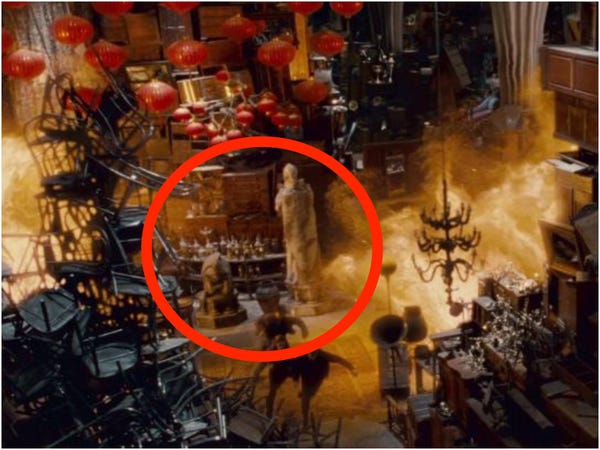 The Room of Requirement makes its first appearance in "Harry Potter and the Order of the Phoenix," but is a crucial location in the final movie, too. The diadem of Ravenclaw, a horcrux, is in hidden in the room but when Harry, Ron, and Hermione try to find it, they are chased by Draco, Blaise, and Goyle's fiendfyre.

As they make their escape, you can see several nods back to the first few "Harry Potter" movies. Notable ones are the chess pieces from "The Sorcerer's Stone" and Gilderoy Lockhart's cornish pixies from "The Chamber of Secrets." The props department apparently filled the room with props and objects they used in the first few movies.

210,000 coins were made for the Gringotts vault scene 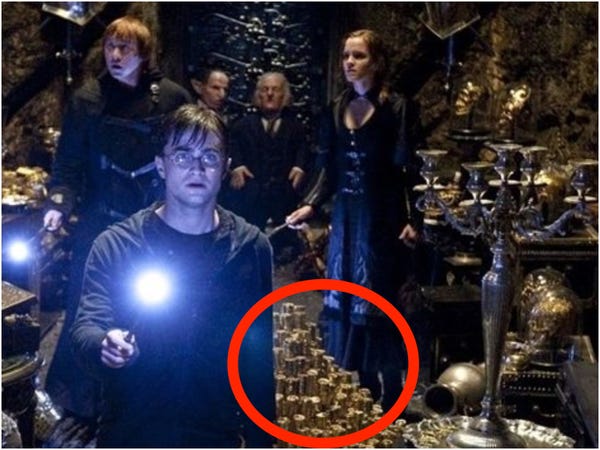 One of the scenes that required the most props, however, was the sequence where Harry, Ron, and Hermione break into Gringotts bank in the hopes of finding a Horcrux. They eventually make it into Bellatrix's vault, but a curse strikes that multiplies any object touched.

This means a hell of a lot of cups, jewels, and coins were needed and the props department ended up making 210,000 gold coins for this one scene alone. 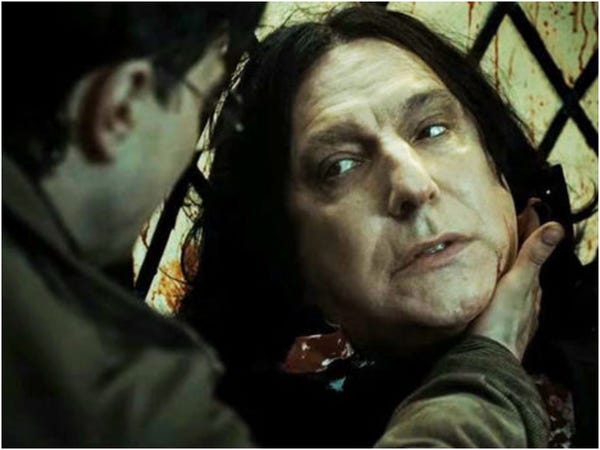 Severus Snape has a pretty complex, love-hate relationship with Harry. You find out why later on in this film when we see Snape's memories via the Pensieve, but for the first seven movies, Snape is pretty standoffish with Harry, to say the least.

He always refers to him as Potter or Mr. Potter, but in his last scene as he lays dying he addresses Harry by his first name for the only time before telling him that he has his mother's eyes. 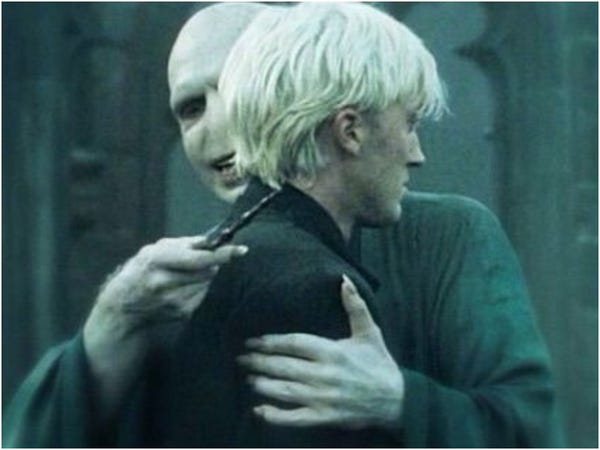 Voldemort is not the most loving character in the "Harry Potter" franchise, so it was pretty surprising to see him hug Draco Malfoy during the film's climax. It turns out it was surprising to Tom Felton, too, as the hug was completely improvised.

"It was pretty terrifying to be honest with you. That wasn't in the script… we did that take like 25 times, he only hugged me once. It was a one-off thing that he just threw at me," Felton said during a 2011 comic-con appearance.  "I was standing there like 'What the hell is he doing? Why is he hugging me in this weird fashion?' It was very strange; it was a surprise for me."

This is actually the shortest Harry Potter movie 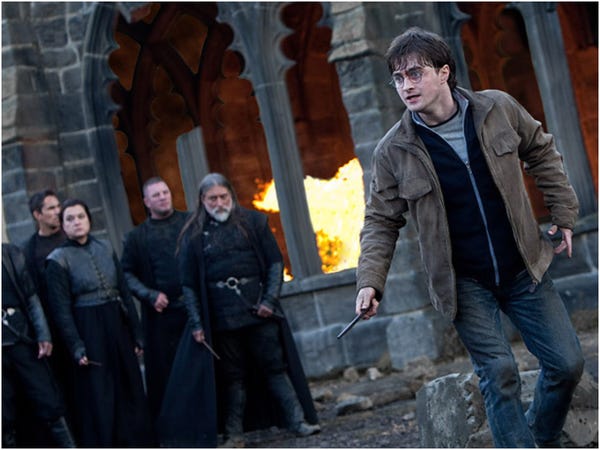 The last film of a franchise is usually the longest as all of the many plot strands and characters come to a head. "The Return of the King" was the longest "Lord of the Rings" movie, "Avengers: Endgame" is the longest Marvel Cinematic Universe movie.

The final Harry Potter movie, on the other hand, is the shortest in its franchise at 130 minutes, which is surprising even when you factor in that this story was split into two movies. The longest Harry Potter movie is actually "The Chamber of Secrets," which clocks in at 161 minutes.

Kate Winslet was offered the role of Rowena Ravenclaw 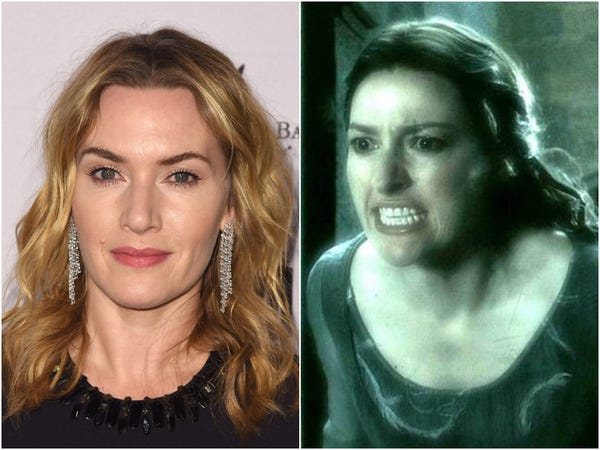 Kate Winslet is an Oscar-winning actress and one of Britain's best thespians, and was offered the chance to join the "Harry Potter" series in the small but important part of Helena Ravenclaw, daughter of house founder Rowena.

However, according to ScreenRant, Winslet's agent rejected the offer before the actress even saw it, believing that she wouldn't want to "follow suit with every other actor in Britain by being a part of 'Harry Potter.'"

It remains to be seen as to whether Winslet would have wanted to join the franchise or not, but the role eventually went to Kelly Macdonald. 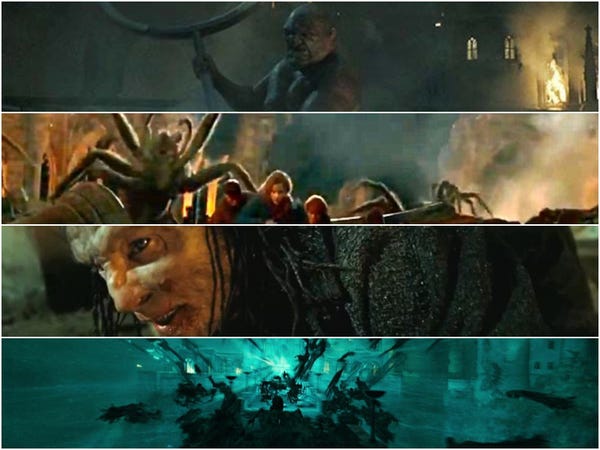 In the climactic Battle of Hogwarts, Harry, Ron, Hermione, and co. fight off trolls, acromantula (giant spiders), a werewolf (Fenrir Greyback), and dementors. These are all enemies they fought in the first three movies.

In "The Sorcerer's Stone," Harry and Ron saved Hermione from a cave troll in the girl's bathroom; in "The Chamber of Secrets," Harry and Ron fought off Aragog and his colony of acromantula; and in "The Prisoner of Azkaban," the trio faced a werewolf (Remus Lupin) and a horde of dementors.

Alan Rickman knew about Snape's backstory years before this film 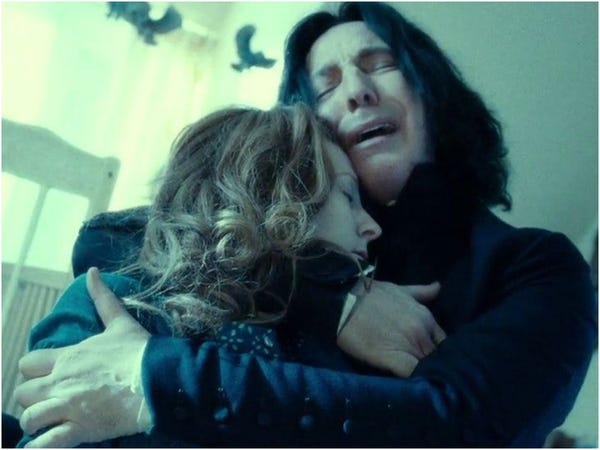 Severus Snape has one of the most intriguing backstories, revealed in flashbacks via the Pensieve in the last act of this movie. But author JK Rowling actually told Snape actor Alan Rickman all about his character's history years before the final movie was ever shot.

In January 2016, four days after Rickman's death, Rowling explained that she told Rickman about the meaning behind the word "always," a now-iconic Snape quote. 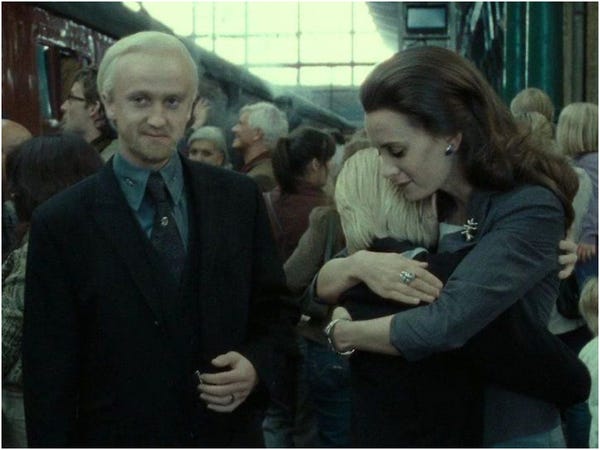 The epilogue in "The Deathly Hallows — Part II" shows us Harry, Ron, Hermione, Ginny, and Draco when they are all grown up and married with their own children.

Draco, played by Tom Felton, can be seen saying goodbye to his son with his wife — and it was Felton's then-girlfriend who played his wife in this scene.

Felton confirmed this to MTV, telling reporters: "She was at first reluctant, but I pulled her arm and twisted it. She was filming with me for three days at King's Cross [railway station in the U.K.]; we were very excited." 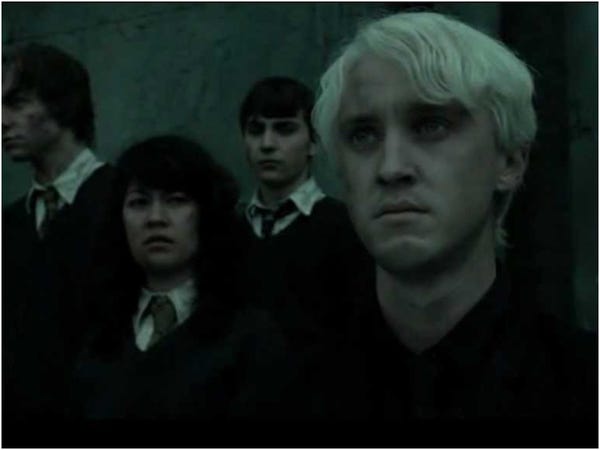 There was one small deleted scene that was filmed but never made the final cut that drastically changes Draco Malfoy's character.

Tom Felton's Malfoy rejoins Voldemort's side when Voldemort triumphantly returns to Hogwarts with Harry's dead body in tow. However, in a deleted segment, Malfoy switches sides again when Harry reveals himself as still alive.

Malfoy rushes forward and throws Harry his wand back, shouting "Potter" as he does so. The scene was likely cut to keep the focus on Harry and Voldemort as the former springs back to life, but it's still a cool scene. Watch below:

Snape was originally meant to die in the Shrieking Shack 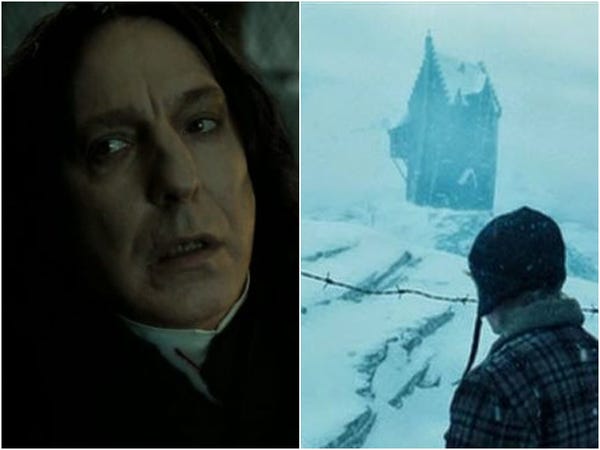 In the books, Voldemort kills Snape in the Shrieking Shack, which is a location that actually has a lot of history for Snape. Back in his school days, he followed Remus Lupin, Sirius Black, James Potter, and Peter Pettigrew there in the hopes of getting them into trouble, only to be almost killed by Remus as a werewolf and saved by James.

Then, as a teacher, he caught Harry, Ron and Hermione in the shack with Remus and Sirius, and tried to arrest the two older wizards only for Harry to disarm him and knock him unconscious before the truth about Scabbers/Peter Pettigrew was revealed.

But despite this historical significance, art director Andrew Ackland-Snow explained that they changed the setting in the film with Rowling's blessing: "We wanted to get him out from, not a conventional interior, but from that kind of box, to do it in a more dramatic atmosphere." 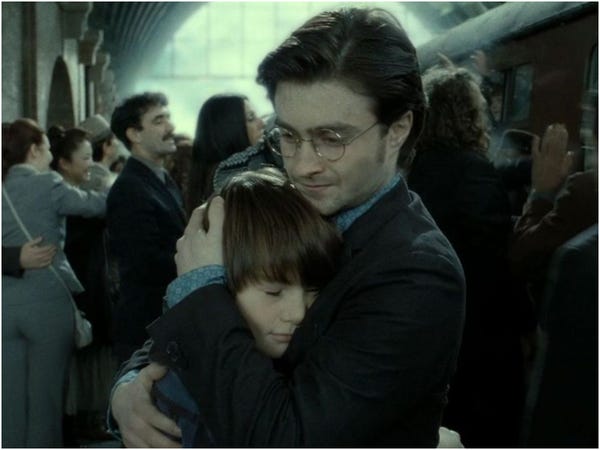 It seems fitting that Daniel Radcliffe's Harry gets the last line in each movie — they are his stories, after all. But in the last ever "Harry Potter" movie, Harry doesn't actually get to say the last line.

Instead, the last line spoken is by his son, Albus Severus Potter. After a conversation in which Harry reassures his son about which house he might be sorted into at Hogwarts, Albus says "ready," which is ironic seeing as none of us were ready for the end of "Harry Potter."

Watch the first and last lines of each "Harry Potter" movie below:

The filmmakers wanted Harry to fight Snape instead of McGonagall 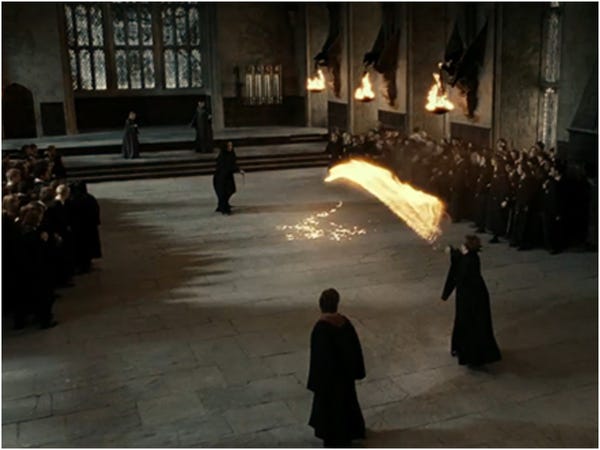 In the books, Minerva McGonagall takes on her former colleague in a Hogwarts corridor alongside Professors Sprout and Flitwick, while Harry and Luna Lovegood hide under the invisibility cloak.

The filmmakers wanted to change this so that Harry is the one who fights Snape, but couldn't clear it with Rowling. Rowling saw this moment as a defining one for McGonagall and so insisted that the filmmakers stick with McGonagall versus Snape, even if the locations and scene were changed. 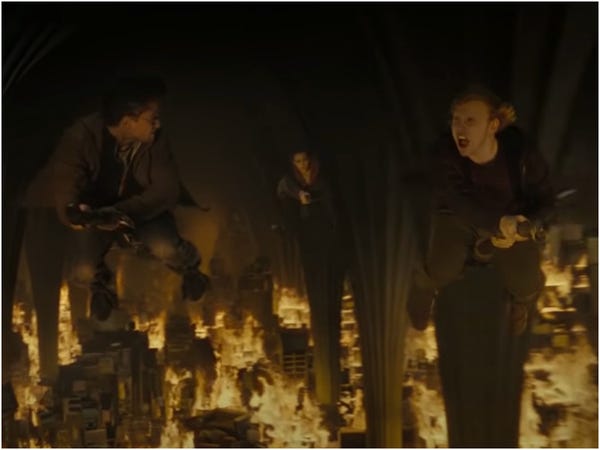 Rupert Grint and Emma Watson both had casts of their backsides made for them for the Room of Requirement scene in which they ride broomsticks because the sticks were so uncomfortable.

Watson told the Daily Sport back in 2009: "It's not the most comfortable thing. They made this little seat for me so they took this mould of the chair area." 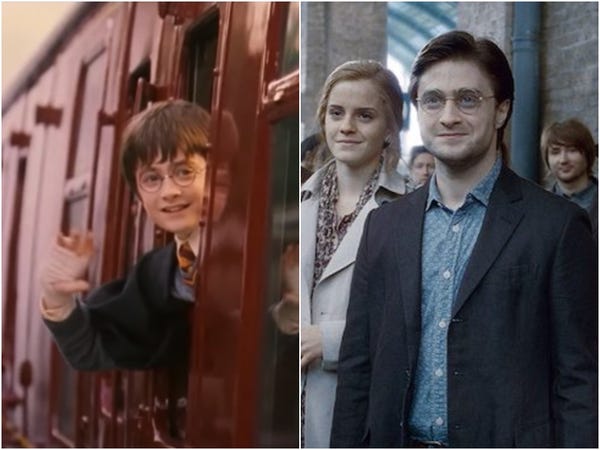 John Williams' score is one of the best things about the "Harry Potter" film series and while "Hedwig's theme" may be the most famous of tracks, "Leaving Hogwarts" is certainly the most emotional.

It's this piece of music that suitably ends both "The Sorcerer's Stone" and "The Deathly Hallows Part 2." Harry's son, Albus, may be heading to Hogwarts for the first time in the last scene, but we as an audience are saying goodbye to Hogwarts once and for all, making that track extra tear-inducing.

END_OF_DOCUMENT_TOKEN_TO_BE_REPLACED

END_OF_DOCUMENT_TOKEN_TO_BE_REPLACED
We and our partners use cookies on this site to improve our service, perform analytics, personalize advertising, measure advertising performance, and remember website preferences.Ok