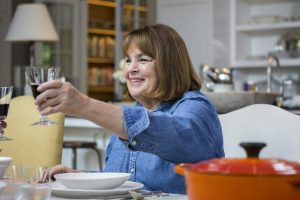 Ina Garten is a pro when it comes to fall cooking. It’s the time of year when pumpkin starts popping up on menus everywhere, and the Food Network star loves to make sweet treats featuring pumpkin puree.

From pies to cupcakes to mousse, here are six of The Barefoot Contessa’s best pumpkin desserts that are perfect for fall.

We’ll be honest, this is an advanced recipe from The Barefoot Contessa. So, you will need to know what you’re doing in the kitchen when attempting to make her Pumpkin Roulade with Ginger Buttercream.

Kitchen tools needed include a sheet pan, parchment paper, a sifter, an electric mixer fitted with the paddle attachment, a rubber spatula, a wire rack, a large cutting board, and a towel.

Garten admits that she’s not really a pumpkin pie person. Instead, she prefers making her famous Pumpkin Cupcakes with Maple Frosting.

“The truth is I’ve never really liked pumpkin pie, so yes, I have another idea this year: Pumpkin Cupcakes with Maple Frosting!” Garten says. “Everyone gets their own individual cake — and the toffee topping isn’t bad, either.”

The Barefoot Contessa insists that the cream cheese and butter must be at room temperature, and suggests leaving them on the counter overnight. She also recommends using canned pumpkin puree.

“Don’t be tempted to use fresh pumpkin — canned is better and easier!,” Garten says.

Put your kitchen skills to the test with Garten’s Pumpkin Mousse. You’ll need a souffle dish, an electric mixer fitted with the whisk attachment, and a double boiler.

Even though it’s not Garten’s favorite fall dessert, she still has a recipe for the ultimate Pumpkin Pie. She uses a lot of the traditional flavors and classic warm spices, like cinnamon, ginger, and nutmeg. However, The Barefoot Contessa does put her own unique spin on the popular dessert with the addition of orange zest and dark rum.

Garten’s recipe for Pumpkin Banana Mousse Tart is the easiest on this list, but it does take some time and a long list of ingredients. You’ll be making a crust from scratch with graham cracker crumbs, ground cinnamon, sugar, and unsalted butter.

This is another pumpkin dessert that takes some time and skill, but the result will be a crowd-pleaser. Garten’s Pumpkin Flan with Maple Caramel takes more than five hours to make from start to finish. And it includes fancy ingredients like fleur de sel, grade A maple syrup, pure maple extract, and Italian mascarpone.

We advise following the Barefoot Contessa’s recipe word for word to “cook like a pro” and get the desired result. Especially if you’ve never made flan before. If you can nail this recipe, you’ll probably find yourself adding this dessert to your holiday lineup because it’s absolutely delicious.

New episodes of The Barefoot Contessa air Saturdays on The Food Network.