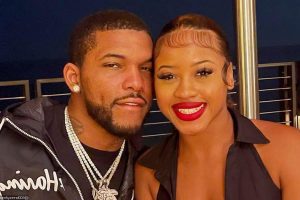 In related news, the ‘Don’t Get Smoked’ rapper takes to his Instagram account to apparently react to accusations that he faked a text message from his late girlfriend Raven.

AceShowbiz -More details surrounding the death of 600 Breezy‘s girlfriend Raven surfaced online. According to a new report, the social media personality, who had been vocal about her mental health problems, decided to end her life after having an argument by phone with the rapper.

On Thursday, September 8, Gossip of the City took to its Instagram page to share screenshots of a Facebook post revealing some alleged facts about her death. The Facebook user, who claimed that they got the information from “somebody who lived next to the deceased,” wrote, “After a phone argument with her boyfriend 600 I guess Raven was just at her last end and gave in to the devils temptation.”

The person also noted that Raven didn’t jump off of a bridge. “She may have been sitting at the bridge in her complex thinking about it but she did not jump. She shot herself!” the user alleged. “Neighbors heard a single shot Thursday evening and thought nothing of it because they couldn’t locate where the noise came from. If you hear 1 random shot where do you send the police? Most residents were getting ready for bed during this time.”

It was also said that her family last heard from Raven on August 31, the day before she allegedly shot herself. It took five days for her mom to call police for a welfare check. Later on September 6, local police did a welfare check at her apartment where they discovered her body.

“On 9/7 her apartment was cleaning out by maintenance workers at her complex who brought out bloody items covered in her brain matter,” the person added. The poster also appeared to refrain people from blaming her boyfriend and her family for not calling police earlier.

The person also insisted that their source is credible. “Before you say I am making this up just know this person has to walk by that apartment everyday knowing there was a young lady decease and nobody even knew,” the user continued.

In related news, 600 Breezy appeared to react to accusations that he faked a text message from his late girlfriend, Raven. Of the text, which he previously shared on his Instagram page, the rapper did admit that the text message exchanges were not their last messages.

He recently edited the initial caption of his post, adding, “THESE WERE NOT OUR LAST MESSAGES!! THIS IS JUST ONE OF THE MANY TIMES LAST MONTH THAT I HAD TO STOP HER FROM. I JUST NEED YALL TO FEEL AND UNDERSTAND HER SO THIS CAN STOP HAPPENING, IM DIEN I WASNT THERE FOR HER BUT YOU CAN BE THERE FOR YOUR LOVED ONES.”

Prior to this, Raven’s cousin accused him of using her death for fame and doubted the validity of the text message. “I’m calling bulls**t to this,” Brittany Cross tweeted on Wednesday, “And I’m ready to go on the record.” She went on to say, “What’s the date on these bulls**t text messages? This mfer trying to come up off of my cousin’s death. Why is the date important? Because her momma just called the cops in Alabama THIS MORNING for a wellness check.”

When someone argued that the date of the text doesn’t matter, Brittany replied, “The date does matter. She was discovered on 9/6. She’s been deceased for a few days. No one had heard from her since 8/31. Dead women can’t text. So you telling me he’s already had the texts and never alerted anyone to go to her apartment?”

Brittany additionally claimed that 600 Breezy refused to take down his post about Raven. She said, “They weren’t together! I’m her family, first cousin to be exact. We’ve asked him to take down and he has refused. Where was he when my cousin was hurting?”