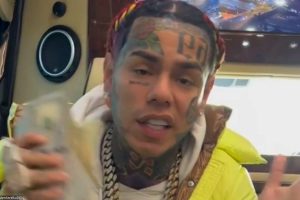 In an Instagram video, the ‘TROLLZ’ rapper says he was going to spend $20,000 in the club, but ends up using the money for ‘something better’ after running into a family selling flowers on the street.

AceShowbiz –6ix9ine may be “broke” now, but at least he still has his conscience to those in need. The New York City native has revealed he’s giving away $20,000 in cash to a random family despite his recent claims that he is “struggling to make end meets.”

6ix9ine, born Daniel Hernandez, boasted about his spontaneous act in an Instagram video posted on Sunday, April 24. In the clip, he flashed a stack of cash he was holding in a car while explaining that he was going to spend the money in the club, but ended up using it for something better.

“Yesterday I was going to go to the club. I was going to blow $20,000, I didn’t end up to the club,” he said in the video. “On the way to the airport, I see this family.” The rapper said those people were selling flowers to feed their family.

6ix9ine was seen pulling up and getting out of his car to approach the family selling flowers. After giving them their money, they shared an embrace and had a brief heartwarming conversation.

6ix9ine’s action was apparently noticed by a passerby, who excitedly greeted him and supported the “GUMMO” spitter for his charitable act. He stopped by the fan’s car and took a video with him while the fan was raving about the star.

6ix9ine further explained in the caption, “I was going to spend 20,000 last night in the club but I didn’t get to do so but I spent it on something better.” He added, “LETS GET BACK TO IT IF YOU KNOW ME I BEEN DOING THIS AND ITS NEVER GONNA STOP.”

“I WOKE UP TODAY FEELING GREAT THE LITTLE THINGS IN LIFE MATTER MORE THEN EVER,” he shared. He additionally vowed to give away at least $50,000 to those in need every week, writing, “NOW EVERY WEEK I WILL TRY TO GIVE ATLEAST 50,000$ AWAY TO SOMEONE RANDOM FOR PEOPLE IN NEED #GINE GINE.”

While 6ix9ine was praised by his Instragram followers for his generosity, this seems to contradict his previous claim that he is broke. In court documents submitted earlier this year as a response to a civil lawsuit brought forth by the victims of a 2018 robbery that 6ix9ine was present at, he told the judge in the case, Judge John P. Cronan, he cannot pay the plaintiffs the money they are seeking for because he is broke.

He said his deal with TenThousand Projects expired in February and he hasn’t paid back his advance. He said he still has a publishing deal, but his royalty account remains unrecouped due to the enormous advances he accepted, so he is not receiving any income from the agreement.

He went on arguing, “If the Court awards the compensatory damages and punitive damages sought by the Plaintiffs at this inquest, it will surely bankrupt me in a way from which I will never recover to the permanent detriment of the family members who rely upon me.” The rapper’s accountant Justin Kobay additionally listed 6ix9ine’s net worth at “technically less than zero.”

Recently, 6ix9ine also clarified that the money he showed on Instagram was fake. “I ain’t got it right now. That was prop money,” he told TMZ of the video in which he was flexing by showing off his chains, diamond watches, luxurious cars and $1.3 million in cash that he put in the hood of a Lamborghini.