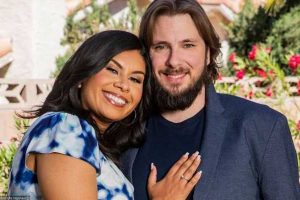 The TLC personality, who previously married Larissa Dos Santos Lima, take to Instagram that his wife suffered miscarriage, writing in the post that ‘it breaks my heart.’

AceShowbiz -“90 Day Fiance” stars Colt Johnson and Vanessa Guerra are opening up about their pregnancy loss. On Monday, October 11, the TLC personality took to Instagram that his wife suffered miscarriage.

“Vanessa and I have experienced a loss we’d like to share,” Colt wrote in his post which featured a baby’s sonogram and written verification that Vanessa returned a positive pregnancy test on September 2. “We recently discovered she was pregnant.”

He then shared that the pregnancy surprised them and “really changed our perspective on life and our future.” The 36-year-old continued, “We started to think about a future with our child. We both became really happy with the prospects and imaginations of sharing a life with them. Unfortunately, the only news I can give on them is that they will no longer be joining us. It breaks my heart.”

Expressing her condolence to the couple was Colt’s mother and fellow “90 Day Fiance” star Debbie Johnson. Writing in the comment section, Debbie said, “My heart not only breaks but also aches for what Vanessa and Colt are going through.”

“It is so very sad that things like this happen. One minute you are on top of the world with joy. Then the next you can’t believe how much it hurts. My love goes to my family. I love you both Colt & Vanessa,” she added.

Colt made a surprise announcement that he married Vanessa back in May. “I like to announce that Vanessa is my wife,” he wrote at the time. “I married my best friend and despite what others might say; I know we will find our happily ever after. @vanessaj_702 #marriedlife #90dayfiance @discoveryplus #putaringonit Love you Mrs. Johnson.”

His marriage arrived following his April 2019 divorce from Larissa Dos Santos Lima. He dated Jess Caroline after the split but they broke up as Colt was also seeing Vanessa when he was still with Jess.