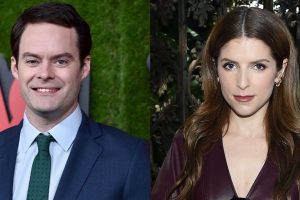 There’s being low-key about your relationship, and then there’s being Anna Kendrick and Bill Hader about your relationship, which is to say, “being so damn under-the-radar that no one even realizes you’ve been dating until after your one-year anniversary.” Because that’s apparently what Anna and Bill did, which is why everyone was caught so completely off-guard when People broke the news this weekend that they’ve been “quietly dating” for more than year.

Join us as we attempt to construct a timeline of Anna and Bill’s lowest of low-key relationship.

Anna and Bill obviously got to know each other as costars in their Disney+ Christmas movie, Noelle, which started filming in Vancouver in October 2017 (Anna commemorated the beginning of filming with a v cute IG post).

According to People’s source, nothing romantic happened between them on the Noelle set (Hader was still married to his now ex-wife Maggie Carey at the time and Anna has been notoriously private about her love life for years).

“They got together well after the movie,” People‘s source said. “They are both very private people, and with the pandemic it was easy to keep it quiet. They’re both hysterical so they must keep each other laughing all of the time. She’s really, really happy.”

Before his super secret ‘ship with Anna Kendrick, Bill Hader dated his The To Do List costar Rachel Bilson from late 2019 until the summer of 2020, when sources said they decided to end things amicably.

We can’t nail down the exact beginning of their romance, but if Anna and Bill have been dating for more than a year, as sources say, that means they’ve been together since *at least* December 2020. We have zero details about what prompted them to get romantic, but we assume it involved exchanging a series of witty/sexy texts since they’re both hilarious and that shared hilarity has reportedly been part of what makes their relationship work.

“Anna and Bill have been dating for a while. They really like each other and share the same sense of humor,” a source told Entertainment Tonight of their romance. “They’re both very happy in the relationship and it shows. They have a natural connection.”

People initially broke the news that Anna and Bill are dating, but reported that “reps for both actors declined to comment” when asked about the romance, which is obviously very on-brand for their stealth relationship.

We’ll update this post when (/if?) more details about this super secret love story surface.