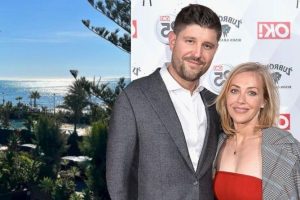 Laura Hamilton shares memories of home as she moves out

A Place In The Sun presenter Laura Hamilton posted a picture of her sunny views in San Pedro de Alcantara, Spain. The 39-year-old appeared to be standing on a balcony while catching some rays close to the beach on a hot day. In view of her 143,000 followers, she wrote: “Hello sunshine.”

Much like her last post, she has blocked her fans from commenting, in light of her marriage break-up.

It has however been liked by over 1000 of her followers, including her new co-star Craig Rowe.

Laura’s trip comes just a day after she announced she and long-term husband had separated.

The property expert wrote: “This isn’t something I ever thought I’d be saying but, after 13 years of being together Alex and I have separated.

“Our children are and always will be our number one priority and we would respect privacy for our family at this time.”

Laura shared the caption alongside a quote which read: “Don’t cry because it’s over, smile because it happened.”

The presenter and Alex were together for 13 years and married for 10.

Ahead of her split announcement, Laura revealed she had been gradually moving out of their family home.

Fans were quick to question why she made the decision as they discovered just how beautiful her house was in a video she shared.

She wrote: “Today we close the door and say goodbye to a home that we have loved and enjoyed for the last 9 years – the longest I have lived anywhere in my entire adult life!

“Change can be scary but you know what is scarier? Allowing fear to stop you from growing, evolving and progressing.”

The presenter went on to say that when a situation feels scary, “that’s exactly when you jump”.

“Otherwise you just end up staying in the same place your whole life, and that I can’t do,” she added.

An alleged friend has claimed the pair called it quits after having marital issues in lockdown.

A representative for Laura is yet to respond to Express.co.uk about the report.

The presenter had previously said she had talked Alex into doing a mini series with her during lockdown.

In one video, she was seen cutting his hair when hairdressers were closed due to Covid-19.

As she filmed herself attempting the hair cut, she joked he got “angry” with her after he realised she was filming him in his pants.

“He stopped the video halfway through because he was getting so angry with me,” she laughed.

She added of her idea: “I think that’s what people need is a bit of a laugh, people can see a different side to me.