A$AP Rocky: Did He Really, Seriously, Actually Cheat on Rihanna?!? 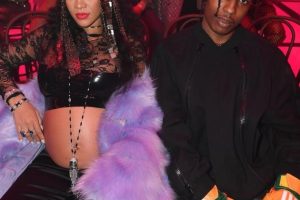 Rihanna is definitely pregnant with her first child.

The singer hasn’t made any direct comments about this exciting situation, but just take a look at the photo below.

Now, however, the Internet is running rampant with a rumor that Rihanna may need to raise this boy or girl on her own.

Because A$AP Rocky may have cheated on her!

According to The Sun, the rapper has been caught stepping out of his famous girlfriend with fashion designer, Amina Muaddi, someone who actually knows Rihanna well because she helped design shoes for her 2020 Fenty drop.

As far as we can tell, there’s no proof to back up this disturbing claim.

However, sources say A$AP Rocky and Rihanna were recently spotted at a restaurant in Los Angeles… with Rihanna then  seen crying at the table before leaving without her allegedly dishonest boyfriend.

This allegation comes just under a month since people starting saying Rocky and Rihanna were engaged.

And it’s seriously messing with the artist’s fan base.

“Okay so Rihanna and ASAP Rocky are breaking up. He cheated on her,” wrote one Twitter user this week.

“WAIT, HE CHEATED?? ON RIRI?? WHILE PREGNANT?? AND WITH DESIGNER AMINA MUADDI?? WAIT AGAIN, AREN’T RIRI AND AMINA FRIENDS?? WTF IS GOING ON??”

This question is now a common refrain on social media.

“Don’t play with us like that,” someone else wrote. “We know ASAP Rocky can’t be that dumb to cheat on Rihanna. If it’s true we are cancelling Amina Muaddi and him.”

Her latest message offers up praise for Rihanna’s pregnancy style, which some are interpretating as a sign that she’s absolutely been sleeping with Rocky.

Hence why she’s now trying to suck up to her former friend..

It take more than a few clothes-related comments for Muaddi to make up with Rihanna, though, if this whole cheating story is true.

The upsetting claims have broken apart the World Wide Web in the wake of Rihanna opening up about her relationship with A$AP in a rare interview with Vogue.

Revealing that they grew close during the first lockdown, she explained:

“He became my family in that time. I cooked our food on this little janky grill I bought from Walmart.

“I still have it, too. It works like nobody’s business. I love the simple things but also the grand adventures.

“There’s no pretentious my-brand-your-brand bullsh*t, it’s just us living. I just feel like I can do any part of life by his side.”

A$AP Rocky, for his part, has not said anything about the speculation that he cheated on one of the world’s most popular celebrities.

Does his silence speak volumes?

Or is he choosing just not to dignify this possible nonsense with a response?