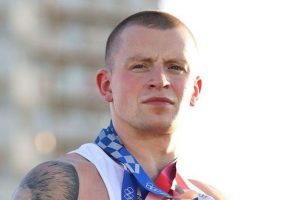 Strictly: Adam Peaty says he had a 'challenging' day in the studio

Adam returns to screens tonight as he and dance partner Katya Jones look to wow the judges on Strictly Come Dancing. He and other celebrities and notable figures are now seven weeks into the competition. The show opens tonight with a celebratory group routine from the Strictly professionals and a performance from The Script, while two couples will later compete against each other in the dance-off — with one unlucky duo heading home.

Adam, a three-time Olympic gold medalist and eight-time World Champion in swimming, is no stranger to the spotlight.

Having just come off the back end of winning gold at this year’s Tokyo Olympics, he became the first British swimmer to successfully defend a title at the Games.

In recent years, Adam has become known for his no-nonsense attitude both inside and outside the pool.

In 2018, he directly challenged swimming’s governing body, Fina, to ban him after he backed plans for a new International Swimming League (ISL).

A new event, it was extremely popular with top-level swimmers due to take place in December 2018.

It was pulled, however, after Fina threatened to prevent participants from competing in the 2019 World Championships if they chose to swim in the ISL competition.

Adam, enraged by the decision, at the time told the BBC: “I don’t care, ban me if you’ve got to.

“I’m not bothered because at the end of the day they know they can’t.

JUST IN: Strictly POLL: Who is the best celebrity dancer of all time?

“They can’t get away with it because you’ll lose all of the respect from the athletes and you can’t bully them.”

Fina went on to lift the sanction on the ISL and launch its own Champions Swim Series.

But this only further damaged its relationship with some of the sport’s leading athletes.

Adam described the backtrack as “embarrassing and offensive”.

A prize fund of around £4million was on offer for the Fina competition, while the ISL offered winners a share of at least £10million, with further incentives based on additional sponsorship and broadcast deals signed before the competition.

Adam said: “£4million in prize money is nothing in terms of what they’ll make off that league ‒ they’ll make much more.

“We need transparency and a 50-50 split of the profits.

“I love my sport to the moon and back but the main reason people quit swimming all over the world is because there isn’t enough funding.

“I want to secure the future for the kids who are going to be winning the Olympics in 20 years and hopefully making a living out of it.”

Over 30 of the world’s best swimmers met in order to back plans to launch the ISL, also establishing a swimmer’s union independent of Fina.

Adam went on to cruise through to the finals of the ISL, which were delayed due to the coronavirus pandemic.

In November 2020, he picked up where he left off and beat his world record, winning the final along with a hefty cash prize.

Of his achievements on the night, Adam said: “I’m very happy to come away with another world record and on the 50 again it was another British record and a PB [personal best], so I’m getting closer to the 50 world record, which would be ideal!

“I tried to use my energy to get the best swims I could – still a lot to grow, still a lot to learn, but I think I’m in a very good place going into a long course season now, and the Olympics.

Strictly Come Dancing airs at 7:15pm on BBC One.