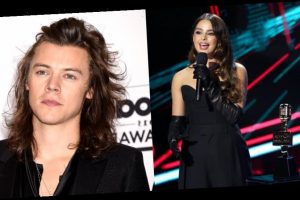 Addison Rae hit the stage in a strapless jumpsuit at the 2020 Billboard Music Awards, which aired on Wednesday (October 14) from the Dolby Theatre in Los Angeles.

“Over the course of a year, my life has completely changed because of a short form video app called TikTok,” Addison said on stage before presenting the award. “The platforms allows users to express themselves in all different types of ways, including viral dance sequences, featuring the hottest new tracks. Whether it’s Doja Cat‘s ‘Say So,’ Cardi B and Megan Thee Stallion‘s ‘WAP,’ or most recently Fleetwood Mac‘s ‘Dreams,’ the opportunities for success are endless on TikTok. It can even help transport a competitive dancer from Louisiana to the Billboard Music Awards stage tonight.”

Since Harry couldn’t make it to the show, Addison accepted the award.

“Harry Styles is unable to be here tonight, so we accept this award on his behalf,” she said.

END_OF_DOCUMENT_TOKEN_TO_BE_REPLACED

END_OF_DOCUMENT_TOKEN_TO_BE_REPLACED
We and our partners use cookies on this site to improve our service, perform analytics, personalize advertising, measure advertising performance, and remember website preferences.Ok