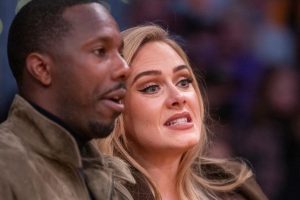 Grammy award winning singer Adele has opened up about her whirlwind romance with sport agent Rich Paul, 39, and describes it as “incredible, openhearted, and easiest”.

The pair have known each other for some years after meeting at a mutual friend’s birthday party but have only been dating since the summer.

The Rolling in the Deep singer, 33, spoke about her new love interest to Rolling Stone and opened up about how their romance developed after reconnecting back in June.

She said: “I didn’t really tell many of my friends at the beginning because I wanted to keep it to myself”.

To get all the latest news on Adele, sign up for OK!'s daily newsletter here.

The star has gone public soon after with the first person since she divorced her husband with Rich.

She spoke to the publication about her reconnection with Rich and said: “Rich just incredibly arrived” and described their relationship as having a “positive impact on her well-being”.

She said: “I don't feel anxious or nervous or frazzled. It's quite the opposite. It's wild.”

The Hello singer is rumoured to be bringing Rich to UK to meet family and friends this month. This came after Adele was spotted enjoying a date night with the agent, who manages the likes of LeBron James.

The pair were cosied up to each other and completely engrossed in a basketball game between the Golden State Warriors and the LA Lakers at the Staples Centre on Tuesday 19 October.

Rich hails from Cleveland, Ohio, over in the United States, but now lives in Los Angeles, California – the same city as Adele.

Rich is a successful businessman and multi-millionaire, but just like Adele he comes from humble beginnings.

Growing up in a one-bedroom apartment with his family, he was urged to pursue a good education by his father, who ran a convenience store located under their flat.

Adele was previously married to charity entrepreneur and CEO Simon Konecki, 47, with whom she shares eight year old son Angelo.

The pair started dating in 2011, just as Adele's career really took off and launched her to superstardom, and they are said to have married in 2016.

They separated three years later in 2019, but their divorce was only finalised in March 2021.

Prior to her marriage to Simon, Adele had a number of romances which inspired her first two studio albums, 19 and 21.