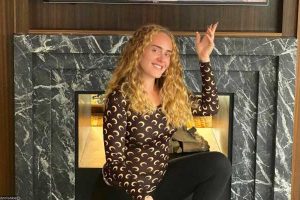 The ‘Hello’ hitmaker has recorded a heartfelt message to the victims and the families who lost their relatives in the west London deadly blaze four years ago.

AceShowbiz –Adele has marked the fourth anniversary of the Grenfell Tower fire in west London.

Monday (14Jun21) marked four years since a small kitchen fire in the high-rise turned into the deadliest domestic blaze since the Second World War, with 72 people losing their lives and another 70 injured.

And the London-born star recorded a moving message in which she thanked Grenfell United – a group made up of victims and the family members of those who lost their lives in the fatal fire – for continuing to “fight the fight” as they wait for more answers in the ongoing public inquiry and seek justice.

In the clip shared by the group, the “Hello” hitmaker said, “Today marks four years since the Grenfell Tower fire, and still, there are so many unanswered questions.”

“Still, the trial is taking way too long, and still, no one has been accountable for that night’s events. And yet, Grenfell United is still out here, fighting tirelessly for the justice and for the change that not only they deserve, that their community deserve, that the whole country deserves.”

“And for that, I’d like to thank you. Thank you for putting your pain aside for all of these years to fight the fight. I can’t imagine the kind of personal consequences that has on you. I really hope that this time next year, you will have the answers that you will need to finally, finally be able to breathe together. I love you, I’ll see you soon, stay strong. We’re all with you.”

An estimated 274,000 flats in the U.K. are still said to be fitted with the same dangerous cladding that went up in flames at Grenfell.

In 2020, Adele attended a memorial event and posted a tribute on social media.

The 33-year-old star wrote at the time, “Today, Sunday, is 3 years since #Grenfell. 72 lives will be forever in our hearts.”

Shortly after the fire, the Grammy-winner visited the scene to speak to victims and their families.