AJ Pritchard admits getting engaged ‘isn’t on his mind’: ‘I’m happy living in the moment’ 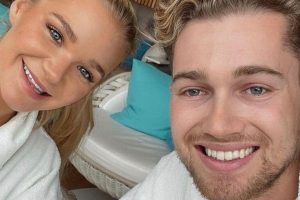 The dancer opened up on his relationship with Abbie Quinnen, who he's been with for two years, admitting they're "really happy," and shared that he's content with "living in the moment."

Speaking exclusively to OK! in conjunction with William Hill, AJ explained: "We're just really happy. I think regarding engagement and marriage, I'm not going to lie I've not even thought about it, because I'm happy living in the moment right now.

"Imagine getting engaged and you can't go on holiday because of the pandemic and everything going on. That would not be a nice engagement."

Abbie, 24, sustained third degree burns after a video hack she and AJ were filming went wrong in January.

Opening up on her recovery, the dancer shared the good news with OK! that Abbie has recently got back up on stage.

AJ shared: "Abbie is doing really good. One thing that is nice is that Abbie put out a goal that she wanted to get back out and performing before the year is out and she's just opened in her pantomime and done her first performance on stage since the accident.

"That was a massive step for her and something that was very hard mentally to just get out there and go for it. I was there for her opening night and it was so nice to see her back on stage doing what she loves."

AJ, who recently said he wants his brother Curtis to 'move out,' plans on spending Christmas with Abbie and her family in London after she did lockdown with his family.

The 27 year old said: "She had to put up with my family during the pandemic so I thought it would be only right to spend Christmas with her family. I am excited. "I'm ready to eat too much chocolate and do nothing."

AJ admitted he's bought his girlfriend a gift, but isn't the best when it comes to Christmas shopping.

"I prefer getting stuff in the sales but that means waiting until January so I do get told off for that. I'll just say I'm working and too busy in pantomime and try and use that as an excuse! It never goes down well," the star shared.

AJ Pritchard was speaking to OK! Magazine in conjunction with William Hill

For more showbiz news and exclusives sign up to OK!'s daily newsletter here