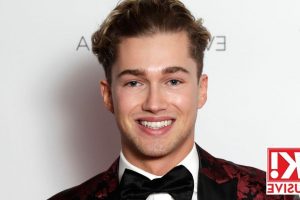 He quit Strictly Come Dancing for pastures new, and now dancer AJ Pritchard has shared his thoughts on returning to the hit BBC show.

The 27 year old was on the show for four years but he decided to leave in a bid to pursue new opportunities.

And, in a chat with OK! in conjunction with William Hill, AJ said he doesn't see himself returning to the show.

AJ told us: "I don't think I'll return to Strictly in the same capacity. As a pro dancer I did what I love to do and I did four years and I was really happy, but I think for me if I were to go back it'd be presenting, or I'd love to do It Takes Two.

"I'll always be a huge Strictly fan because I'm a performer and a dancer.

"Judging wise I'd love to judge and give constructive criticism. I feel like they need a fresh young face on there, don't you?"

AJ is currently starring alongside his brother Curtis Pritchard, who gained fame while on Love Island.

He told us: "I love working with Curtis, but it is love hate sometimes because we're so different.

"Doing a pantomime together, I don't know what he'll do – whether he'll tease me on purpose or put me on the spot. But I do know when it comes together on a live stage or TV is a dream, plus mum and dad are happy because they only have to come and see one pantomime which is great.

"Me and Curtis have little squabbles over the most simplistic things, like who has used all the milk or someone eating the other's cereal."

And busy with work ventures, AJ told OK! getting engaged to his dancer girlfriend Abbie Quinnen "isn't on his mind" right now.

The dancer opened up on his relationship with Abbie Quinnen, who he's been with for two years, admitting they're "really happy," and shared that he's content with "living in the moment."

"We're just really happy. I think regarding engagement and marriage, I'm not going to lie I've not even thought about it, because I'm happy living in the moment right now.

"Imagine getting engaged and you can't go on holiday because of the pandemic and everything going on. That would not be a nice engagement," AJ told us.

AJ Pritchard was speaking to OK! Magazine in conjunction with William Hill