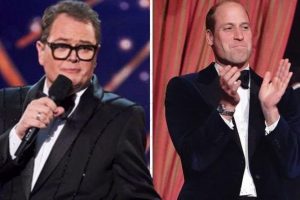 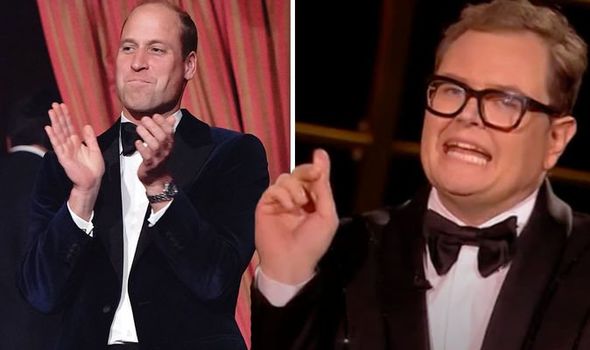 Comedian Alan Carr, 45, delivered his signature cheeky sense of humour as he fronted this year’s Royal Variety Performance from the Royal Albert Hall.

However, ITV viewers were not entirely convinced by his stint as the show’s host when the annual event aired this evening.

Alan didn’t shy away from aiming a mischievous joke at Prince William and his wife Kate Middleton, who were watching on from the royal box.

After complimenting the Duchess of Cambridge on her dazzling green gown, Alan, who has been married to husband Paul Drayton since 2018, quickly quipped to Prince William: “Sir, I am sure you do not know who I am.

“But I am not hitting on your wife.”

The duo both chuckled away as Alan poked fun at them.

Despite Alan bravely risking a joke at the royal couple’s expense, fans were left divided over his hosting debut.

Twitter user Pam fumed: “FFS! This is unbearable. How did Alan Carr get the job? What an unfunny, embarrassment he is. Even his parents are squirming. #RoyalVarietyPerformance.”

Norman tweeted: “Who the feck booked Alan Carr for #TheRoyalVarietyPerformance? His jokes are as old as Rod Stewart’s hair style.”