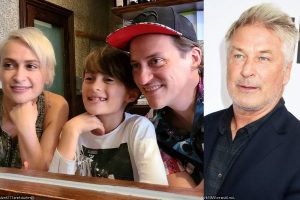 AceShowbiz –Alec Baldwin has met with Halyna Hutchins’ husband and son after a gun shooting on the “Rust” set that took her life. The actor was seen with Matthew Hutchins and his 9-year-old son Andros on Saturday morning, October 23 at La Posada in Santa Fe, New Mexico.

In pictures which have circulated online, the three appeared to get emotional during the meeting. A somber-looking Alec was seen taking turn embracing Matthew and Andros outside a hotel where the family of the late cinematographer is likely staying.

“Honestly, he didn’t look good,” a source says of Alec’s emotional state during the meeting. The three reportedly sat down for breakfast and it was said that the group was “definitely sad” during the breakfast. The source adds that the 63-year-old later bid farewell to Matthew and Andros with a hug.

On Friday morning, Alec took to Twitter to express his sadness over Halyna’s tragic passing. “There are no words to convey my shock and sadness regarding the tragic accident that took the life of Halyna Hutchins, a wife, mother and deeply admired colleague of ours,” he said in a statement.

The “30 Rock” alum, who fired the prop gun that killed Halyna and injured director Joel Souza, added, “I’m fully cooperating with the police investigation to address how this tragedy occurred and I am in touch with her husband, offering my support to him and his family. My heart is broken for her husband, their son, and all who knew and loved Halyna.” He has been questioned by police, but no charges have been filed.

Matthew, meanwhile, said before his meeting with Alex, “I have spoken with Alec Baldwin, and he is being very supportive.” He said on Friday, “I don’t think there are words to communicate the situation.”

Halyna’s father Anatoly Androsovych has also broken his silence on the tragedy, telling The Sun that he doesn’t “hold Alec Baldwin responsible” for the accidental shooting. He argued, “It is the responsibility of the props people who handle the guns.”

Alec himself appears to struggle to deal with it. He was reportedly “hysterical and absolutely inconsolable for hours” after the incident. A source told PEOPLE, “Everyone knows this was an accident, but he’s absolutely devastated.”

“This was pretty devastating,” the source claimed. “This is how he handles difficult times. Whenever something bad happens, in the short term, he removes himself from [the] public eye.” It was additionally said that the actor “is canceling other projects” as he will “take some time to himself and re-center himself” by spending more time with family.