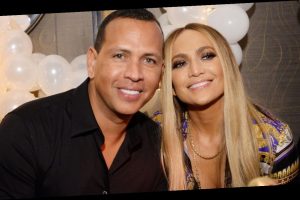 In clips posted by Lopez, Ella took on the role of DJ as she starts up an early-2000s hip-hop medley. The music begins with the Nelly and Kelly Rowland 2002 track “Dilemma,” before moving to others like T-Pain’s  “Buy U a Drink,” Eve’s “Let Me Blow Ya Mind,” OutKast’s “Ms. Jackson” and 50 Cent’s “In Da Club.”

While the group was hilariously showing off their moves the whole time, a particularly funny moment came when Ludacris’ 2001 track, “Move B**ch,” began playing. Lopez jokingly pushed Emme out of frame in line with the lyrics, which made Ella giggle.

The antics continued with bops including Snoop Dogg’s “Drop It Like It’s Hot,” Flo Rida and T-Pain’s “Low,” Sean Kingston’s “Fire Burning” and Ray Jay’s “Sexy Can I.”

The whole family got particularly into doing the iconic dance for Soulja Boy’s 2007 track, “Crank That.”

“These bops had me hype! ✨✨,” Lopez captioned the clips. “Party in Club Basement with Alex, Lulu, Ella Bella and Nick!”

These bops had me hype! ✨✨ Party in Club Basement with Alex, Lulu, Ella Bella and Nick!

Watch the video below for more on Lopez and Rodriguez.