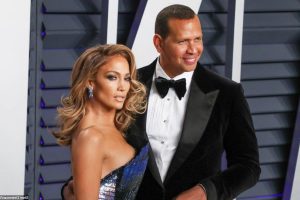 Meanwhile, the ‘On the Floor’ hitmaker is reported to have attended her voice coach Stevie Mackey’s ‘Taco Tuesday’ bash at his Los Angeles home along with other celebrities.

AceShowbiz –Alex Rodriguez apparently still wants to hang out with Jennifer Lopez‘s friends despite their split. Upon learning that he missed out a party thrown by his ex’s close pal and voice coach Stevie Mackey, the MLB legend jokingly asked for an invitation.

On Tuesday, June 29, Steve shared on Instagram a video of a performance before his “Taco Tuesday” bash. The clip saw him sharing a duet with singer Stephanie Ferrett. He captioned it, “Doing a little run thru before Taco Tuesday.”

The post has since caught the attention of A-Rod, who then wrote in the comment section, “Where is my invite – Stevie?!” The voice coach, who has worked with singers such as Selena Gomez, Lenny Kravitz and Fergie (Stacy Ferguson), then replied, “Anytime brother!! Haha.”

Alex Rodriguez jokingly asked for an invitation to Stevie Mackey.

While A-Rod wasn’t there, his former fiancee J.Lo reportedly attended the party. Page Six reported that celebrities such as Keke Palmer and Brandy were also among the attendees.

This came more than two months after A-Rod and J.Lo confirmed the end of their engagement. The couple, who began dating in 2017, told the “Today” show in mid-April, “We have realized we are better as friends and look forward to remaining so.”

“We will continue to work together and support each other on our shared businesses and projects,” the now-exes further stated. “We wish the best for each other and each other’s children.”

While the “Shotgun Wedding” actress has moved on with her ex-fiance Ben Affleck, A-Rod seemingly wanted to enjoy his single status. “[A-Rod] isn’t interested in dating anybody seriously right now or getting into a committed relationship,” a source told HollywoodLife.com.

“He’s still moving forward from the breakup and adjusting to the single life again. He truly thought he had it all planned out and was going to spend the rest of his life with Jen,” the insider added. “He’s made it a point to focus on his family including his two beautiful girls.”