All’s well that ends well for Judi and Ken

BRIAN VINER: All’s well that ends well for Judi and Ken as two of our greatest actors are on fine form starring as Shakespeare and his wife

On June 29, 1613, at the Globe Theatre in London, a stage cannon was fired during a performance of William Shakespeare’s play All Is True, which today we know as Henry VIII.

It was a small theatrical flourish that would have devastating consequences, because the cannon set fire to the Globe’s thatched roof and within an hour the most famous playhouse in England, where most of Shakespeare’s plays had been unveiled, had burned to the ground.

The career of the country’s greatest playwright ended on the same night. He never wrote another significant play and died a couple of years later. 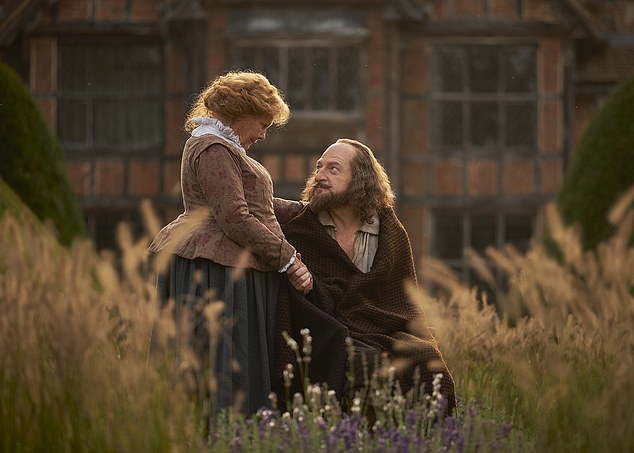 Those last two years are the focus of Kenneth Branagh’s All Is True, as heartbroken and bereft, Shakespeare returns to his home town of Stratford, and to the uneasy embrace of his wife Anne Hathaway and their two daughters, whom he has rarely visited over the previous two decades.

All Is True is a heavyweight production, if only in terms of the personnel. Branagh, who has done as much as anyone alive to bring Shakespeare’s plays to the silver screen, plays the great man himself.

Mind you, he is barely recognisable under a gleaming dome of a forehead, a knobbly prosthetic nose and a jutting, bearded chin which, when added to a surprising lack of assertiveness, give him the air of a man who can’t decide whether to enter a lookalike contest as Ron Moody or Jimmy Hill. 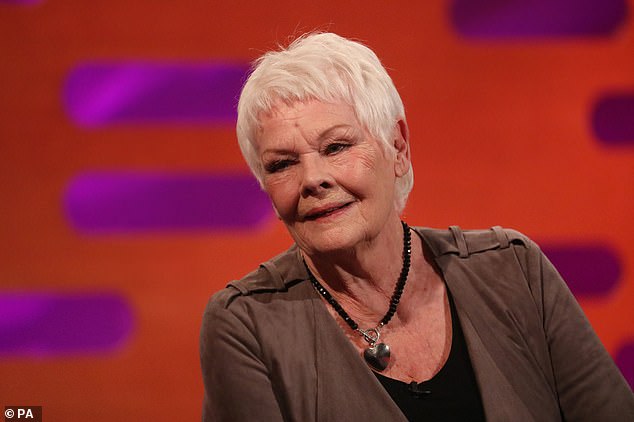 Less compromised by the make-up department, Judi Dench plays Anne, and Ian McKellen has a highly enjoyable cameo as Shakespeare’s erstwhile patron, the Earl of Southampton. It is strongly hinted that the Earl was also the object of Shakespeare’s ardour. Or ‘Bardour’, if you’d rather.

The script is by Ben Elton, who has tempered the jauntiness of his Shakespearean sitcom Upstart Crow to give us a barrage of sexual scandal and a whirl of emotions — grief, resentment, envy, lust — more suited to an episode of EastEnders. Or maybe that’s the wrong soap opera.

All Is True largely unfolds as an everyday tale of country folk, for which Dench unpacks her best rural vowels. It’s a ruff version of The Archers.

The scandals concern both Shakespeare’s daughters. Susanna (Lydia Wilson) is unhappily married to a holier-than-thou Puritan doctor, to whom she is apparently unfaithful.

The grief is mostly Shakespeare’s, whose return to Stratford, without the distraction of writing and staging all those plays, re-ignites the pain of losing his only son, 11-year-old Hamnet, many years earlier.

‘I’ve lived so long in imaginary worlds, I’ve lost sight of what is real,’ he laments, though he at first gets precious little sympathy either from the stolidly undemonstrative Anne, or from miserable Judith, who was Hamnet’s twin, and feels certain that her father would prefer her to have perished instead.

Occasionally, Shakespeare loses his temper with these unappreciative womenfolk. ‘Through my genius I’ve brought fame and fortune to this house,’ he bellows, and 400 years or so later there’s no real arguing with that, though Anne doesn’t look too convinced. Gradually, however, the family learns to live with, and even love, each other again, despite Elton pulling a rather startling late twist out of his garters.

Eyebrows have been raised, incidentally, at Branagh’s decision to cast Dench.

Anne was eight years older, whereas the actual gap between them is 26. I don’t think it matters. It’s a pleasure to see our greatest Shakespearean actress playing the Bard’s wife, and indeed, All Is True contains many pleasures, not least of which is Zac Nicholson’s cinematography.

He pounces like another 17th-century genius, Rembrandt, on the lighting opportunities afforded by all those candles, all those sunbeams streaming through mullioned windows.

If Beale Street Could Talk (15)

Verdict: a musical without songs

The  backdrop to If Beale Street Could Talk, an adaptation of a James Baldwin novel, could hardly be more different: grimy, urban, modern New York City.

The only obstructions to their happiness are extreme poverty — which doesn’t stop them both looking a million dollars, but never mind — and, more seismically, Fonny’s arrest on a trumped-up rape charge. In other words, their colour is preventing them from living the life they deserve. Lots of rhapsodies have already been blown in the direction of this picture, but let me add a raspberry. Or not a raspberry, exactly, because it’s a thoughtful and thought-provoking film, but I expected to love it and didn’t. 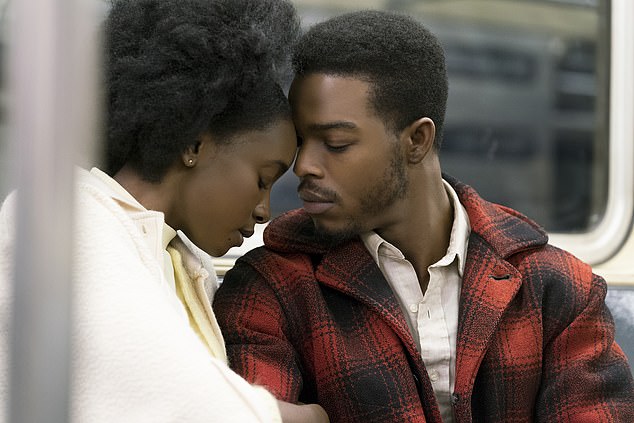 The writer/director is Barry Jenkins, whose last film Moonlight won the Academy Award for Best Picture once they realised they’d dished it out accidentally to La La Land. I thought Moonlight was over-praised, too, and maybe the problem I have with both films is the righteous indignation about social and racial prejudice that drives them.

Legitimate grievances can make for clumsy story-telling, and so it is here. So gorgeous and admirable are our young lovers, so passionate (and frankly, soppy) their love, and so twisted and ugly the racism that blights them (as represented by a laughably venomous white cop), that If Beale Street Could Talk has the unsubtle, unreal feel of a musical, only without original songs.

There’s an enormously powerful scene when Tish’s mother (Regina King) travels to Puerto Rico to confront the woman who wrongly identified Fonny as her attacker — a scene that on its own is probably responsible for King’s Golden Globe win as Best Supporting Actress, which might yet be matched at the Oscars.

And there’s a great soundtrack, too. But overall the film is less than the sum of its extravagant plaudits.

Blasting out the blocks, Lego 2 is a non-stop riot

Five years have passed since The Lego Movie came out, and dismantled brick by brick the cynicism of those who expected it to be the very definition of cinematic product placement and not much more. It was a blast.

This follow-up, directed by Mike Mitchell, lacks the element of surprise, but, as written once more by Phil Lord and Christopher Miller, is even more relentlessly zany.

It weaves an imaginary Lego universe out of the idea that Finn (Jadon Sand) fears his model-making is threatened by his younger sister Bianca (Brooklynn Prince, the sensational young actress from 2017’s The Florida Project). Bianca keeps destroying his fun.

And their mother (Maya Rudolph) can’t bear them squabbling. 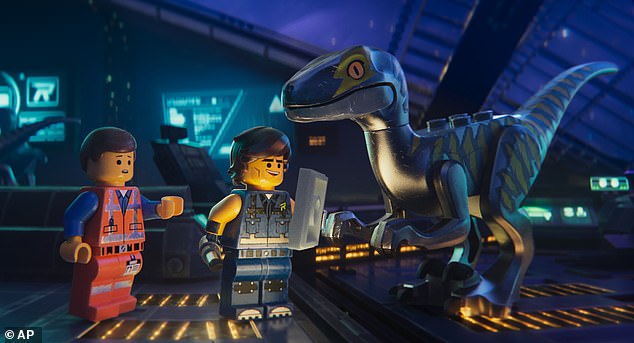 Pictures shows the characters Emmet, left, and Rex Dangervest, center, both voiced by Chris Pratt, in a scene from The Lego Movie 2

Bianca is duly represented by pastel-coloured alien monsters led by General Mayhem (Stephanie Beatriz) and made out of Duplo, the girly version (at least as Finn sees it) of Lego. There follows a dizzying sci-fi Lego v Duplo extravaganza, in which sweet-natured Emmet (voiced by Chris Pratt) finds that his beloved home town has become Apocalypseburg, and he is too nice to prosper there.

The song from the first movie, Everything Is Awesome, has become Everything’s Not Awesome, and he has to learn nastiness from a bristle-chinned buccaneer called Rex Dangervest (also Pratt).

Emmet’s friend Lucy (Elizabeth Banks) wants him to man up, too. Yet there’s no one manlier than Batman (Will Arnett), and it seems that not even he can avoid ‘Our-mom-ageddon’ (the imaginary equivalent of Finn’s mother ordering the children to clear all their toys away).

There are some terrific jokes, snappy one-liners and a stellar voice cast also including Bruce Willis (as himself in Lego form), Ralph Fiennes, Margot Robbie, Gal Gadot, Jonah Hill and Will Ferrell, who again doubles as the children’s useless father.

But the movie is such a non-stop assault on the eyes and ears that it’s not merely a challenge to keep up with everything that’s going on, but a headache.

There is more sci-fi madness and mayhem in Alita: Battle Angel, a hybrid of live action and CGI set in the 26th century, directed by Quentin Tarantino protégé Robert Rodriguez and co-written by none other than James Cameron. Unsurprisingly, restraint is conspicuously absent, especially in terms of the running-time: a bum-numbing two hours and 22 minutes.

The title character (Rosa Salazar) is a big-eyed android, rescued from a rubbish dump by a brilliant surgeon (Christoph Waltz) and given the prosthetic body he designed for his disabled (but sadly murdered) daughter. 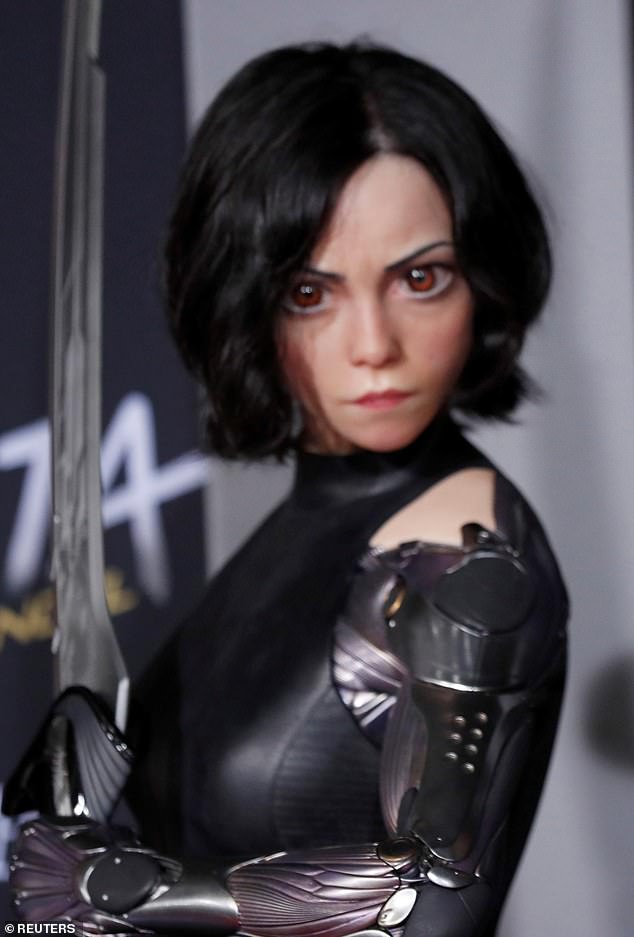 The title character (Rosa Salazar) is a big-eyed android, rescued from a rubbish dump by a brilliant surgeon (Christoph Waltz) and given the prosthetic body he designed for his disabled (but sadly murdered) daughter.

Somewhere in Alita’s memory banks, though, lurks the instinct to fight like an Amazon warrior. Why? Where does she come from? And whose head will she stove in next?

A decent cast also features Mahershala Ali and Jennifer Connelly, the special effects are excellent, but this level of dystopian violence should not be rewarded with a 12A rating.

A fine quartet but a well-worn plot

Last year, a fine film called The Miseducation Of Cameron Post told the story of an American teenage lesbian who was sent by her very religious aunt to a conversion therapy centre, in the hope that she might be ‘cured’ of her homosexuality. These places really do exist.

Boy Erased covers pretty much exactly the same ground, except that the gender is different and this film is based on an actual memoir. It’s nicely acted, with Lucas Hedges excelling as Jared, the gay teen despatched for therapy by his appalled father (Russell Crowe), who also happens to be a lay preacher. 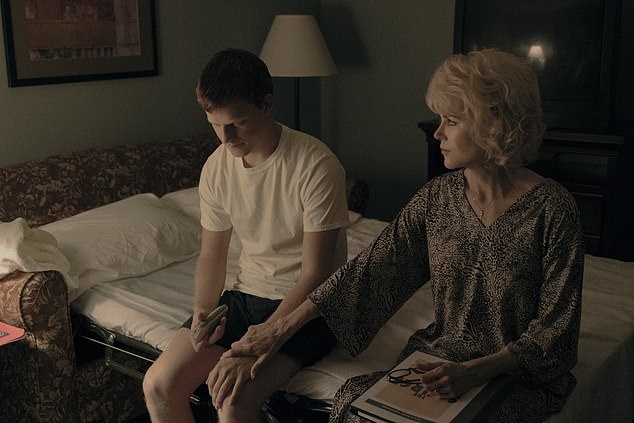 At first, Jared’s mother (Nicole Kidman in a peroxide wig weirdly reminiscent of Miranda Richardson playing the doomed Ruth Ellis in Dance With A Stranger) goes along with this ghastly plan.

Maybe it was a familiarity with the subject matter that made me feel the film dragged unnecessarily in places and was also wholly predictable, with conscious echoes of One Flew Over The Cuckoo’s Nest.

Still, a quartet of performances make it worth seeing. The fourth of them comes from Joel Edgerton, who is also the writer and director, as the centre’s dubiously-qualified principal. That yields the small quirk of all three adult leads being Antipodean, in a film set in Arkansas.

END_OF_DOCUMENT_TOKEN_TO_BE_REPLACED

END_OF_DOCUMENT_TOKEN_TO_BE_REPLACED
We and our partners use cookies on this site to improve our service, perform analytics, personalize advertising, measure advertising performance, and remember website preferences.Ok