Amal Clooney opened up about workplace sexual harassment during women’s conference on Thursday.

Taking to the stage with father-in-law Nick Clooney, the human rights attorney, 40, discussed her experiences at the Massachusetts Conference for Women in Boston.

In a Q&A in front of about 12,000 people, Nick, 84, asked Amal if she had ever experienced sexual harassment, to which she replied, ‘yes.’ 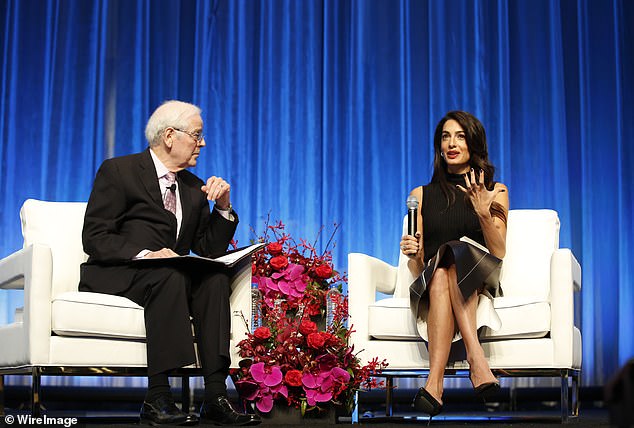 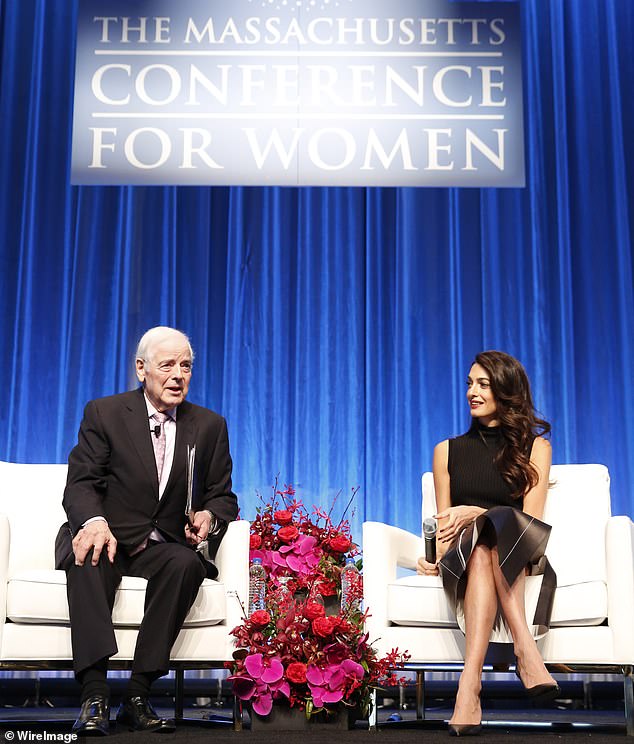 ‘I would not have felt comfortable speaking out about it because other [women in similar situations] weren’t, and so I think that’s changed now.’ said the 40-year-old human rights lawyer

She explained: ‘In the sense of unwanted advances that were inappropriate and awkward to deal with,’

‘Yes. And I think at the time, I would not have felt comfortable speaking out about it because other [women in similar situations] weren’t, and so I think that’s changed now.’

Amal continued to say that she thinks that things are moving forward more positively for women now and that her 18-month-old daughter Ella will hopefully have a better experience in the future.

‘I think the workplace is safer for my daughter and is more fair than it was,’ she said.

‘I don’t think women of her generation are going to expect that that’s just something that we have to put up with and I think now it’s the men, or the harassers, who have something to fear and not the victim and that’s a very good change, so thank you to the women of the Me Too movement.’ 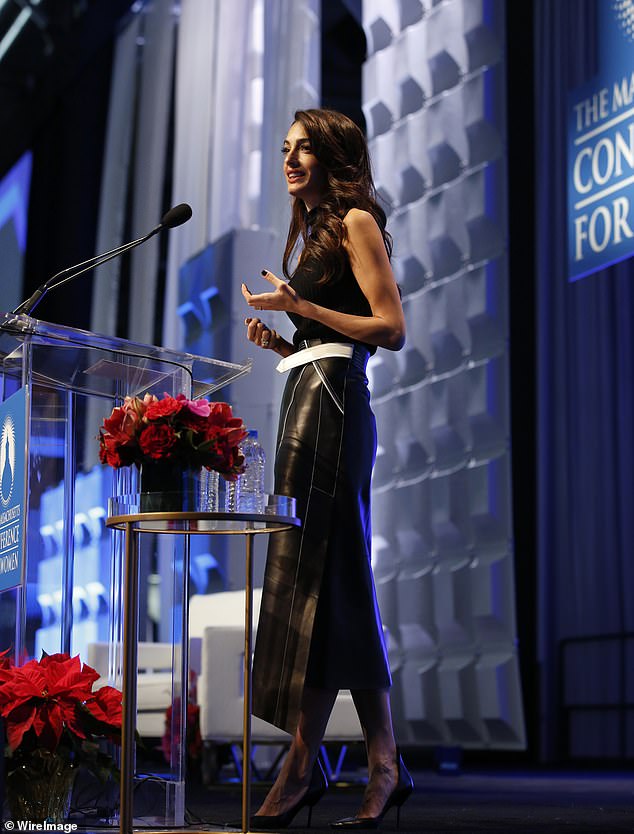 Taking the stage: Amal made remarks at the 2018 Massachusetts Conference For Women in Boston 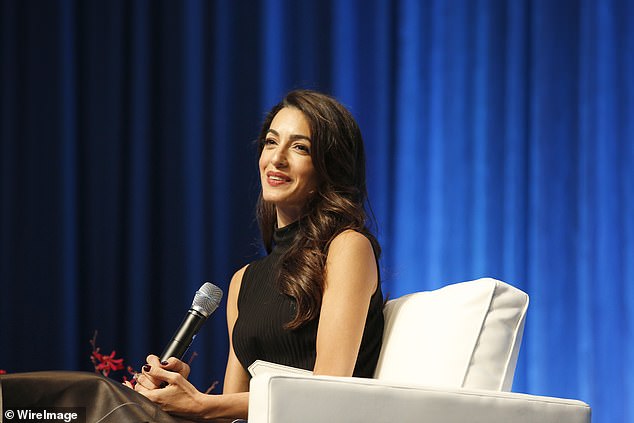 Radiant: The star looked polished to perfection as she took the stage

The wife of George Clooney looked incredible in a black mid-length skirt and coordinating tank top.

On stage, Amal – who also has son Alexander – had audience members in the palm of her hand as she gave a speech on women’s rights, equality, and the Me Too movement.

‘We are living through a moment of reckoning and a rebalancing of power. But it’s a long way from #MeToo to Never Again,’ she said, according to the Massachusetts Conference For Women Twitter account.

‘For too long, women have suffered abuses without speaking out or without being believed,’ she said. 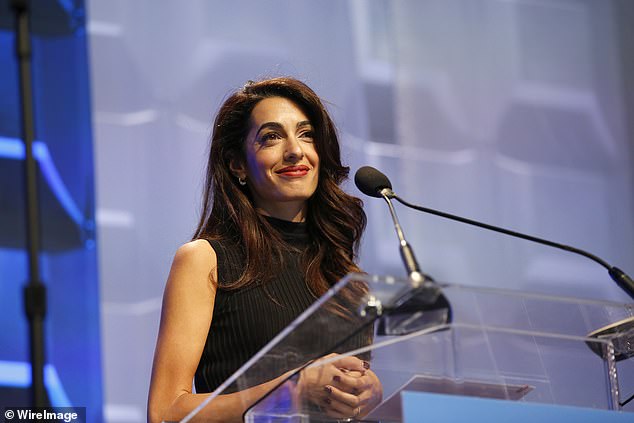 Taking the stage: On stage, Clooney had audience members in the palm of her hand as she gave a speech on women’s rights, equality, and the Me Too movement

‘Rape is part of a plan to systematically control women for the rest of their lives. Rape is an attempt to destroy a woman’s spirit and her will to survive,’ she said.

She also made remarks about equal rights: ‘Achieving equality is not just the right thing to do, it is the profitable thing to do. No country can reach its full potential until women have equal rights.’

Amal was seen emerging from a New York hotel on Thursday with her toddler twins.

The activist carried Ella and Alexander in her arms while looking ever so chic in a black outfit and long leopard print gilet. 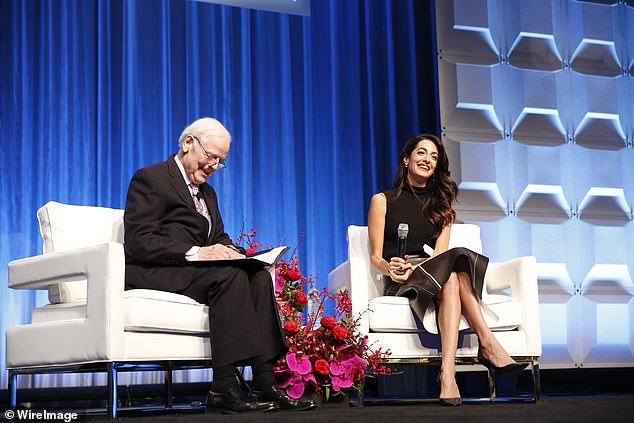 Good chat: The two looked in high spirits as they enjoyed a lively chat in front of audience members

The night before, Amal was a picture of glamour at the 23rd annual United Nations Correspondents Association Awards.

She attended with her husband, George Clooney and also brought two extra special guests along: her in-laws Nick Clooney and Nina Bruce Warren.

Amal was honoured as 2018’s Global Citizen of the Year at the gala. She was appointed to her first UN commission in 2013 and has taken on a number of high profile international cases in her career as a civil rights lawyer.

As she took to the stage, she delivered a blistering speech in which she accused President Trump of giving the ‘green light’ to autocratic regimes who jail and kill journalists after he named the American press the ‘enemy of the people’. 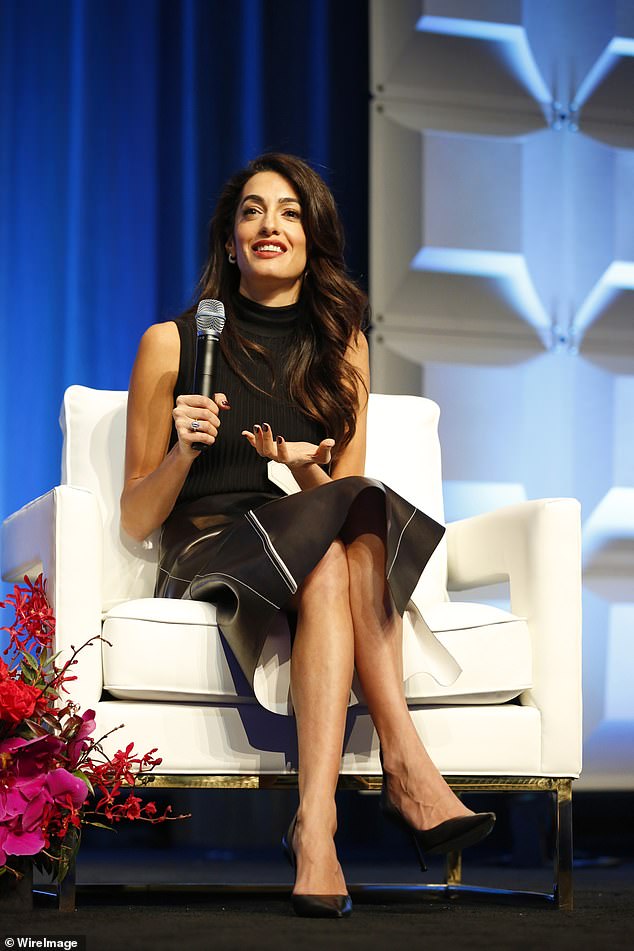 Passionate: She also made remarks about equal rights: ‘Achieving equality is not just the right thing to do, it is the profitable thing to do. No country can reach its full potential until women have equal rights’ 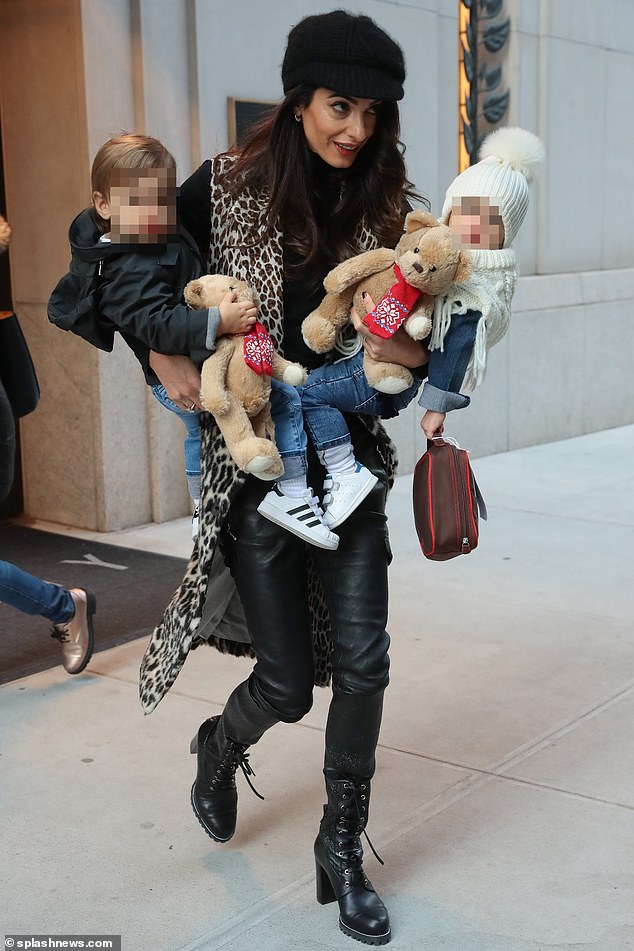 Her little ones: Clooney was truly a hands-on mom as she carried both of her cherubic children in New York City on Thursday