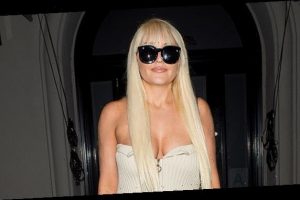 Amanda Bynes made her great comeback on Instagram with a few changes, after spending a few months ‘in treatment’ earlier in 2020. The Nickelodeon star looked incredible!

Amanda Bynes, 34, returned to Instagram with a clean slate on Oct. 2. Gone were all of her past posts, which were replaced by a photo of herself rocking jet black hair and side-swept bangs. Her outfit was equally punk rock, with a yellow plaid flannel, graphic tee, ripped jeans and transparent glasses. The actress looked so cute!

Amanda’s Instagram handle was also renamed to @matteblackonlinestore (a change that she actually made in July of 2020). Although it’s unclear what this means, The Amanda Bynes Show star did tease that she would be launching an “online store” earlier this year. “Update: Getting my Bachelor’s degree from FIDM. Taking online classes, trying to get a 4.0 GPA :]. Looking forward to starting my online store in the future #goals,” Amanda had captioned an Instagram selfie that has since been deleted, according to Us Weekly.

In the same post, Amanda confirmed that she is “still engaged” to her fiancé Paul Michael, despite briefly ending their engagement at one point. Amanda reportedly met Paul while attending the same Alcoholic Anonymous groups, and announced their engagement in Feb. 2020.

Amanda Bynes with her fiancé, Paul Michael, in an Instagram photo shared on Sept. 23, 2020. (Photo Courtesy of Instagram/@paultattedheavy818)

By March, Amanda caused an uproar for posting a photo of a sonogram and captioning the fetus photo, “baby on board.” Likewise, her fiancé also wrote “baby in the making” in his own Instagram post. Both posts were soon deleted, and Amanda’s laywer David Esquibias revealed two months later that the actress was “not pregnant” in a statement to E! News.

Amanda also sought treatment for “mental health” issues earlier this year, which the same lawyer revealed to HollywoodLife shortly after Amanda sparked pregnancy speculation. “Any reports that Amanda is suffering from drug or alcohol addiction issues are completely false. She is seeking treatment for ongoing mental health issues. We ask for privacy during this time, and for any speculation about her personal life from the public and the media to cease so Amanda can focus on getting better,” the attorney wrote in a statement.

At treatment, Amanda revealed that she “worked on coping skills to help with my social anxiety that caused me to drop out of school months ago” during her Instagram update in May (mentioned above.) The Easy A star was in transitional living at the time, adding that she was “back on track and doing well” and “doing therapy during the week.”

Although Amanda rarely posts on social media, she doesn’t need to — her fiancé frequently shares photos of the actress! Paul most recently shared a photo of himself with Amanda on Sept. 23, captioning it, “Lovers” — you can see it above.

END_OF_DOCUMENT_TOKEN_TO_BE_REPLACED

END_OF_DOCUMENT_TOKEN_TO_BE_REPLACED
We and our partners use cookies on this site to improve our service, perform analytics, personalize advertising, measure advertising performance, and remember website preferences.Ok