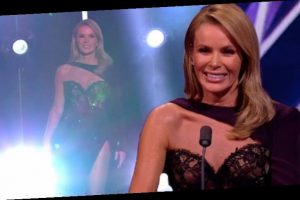 Britain’s Got Talent 2020 judge Amanda Holden, 49, has returned to the ITV contest in another jaw-dropping display with a stunning purple lace gown with her legs on show. It comes after the Heart FM presenter reportedly sparked 235 Ofcom complaints after donning a bardot-style gown on the competition last week.

Amanda is no stranger to stunning her sensational figure in outfits on BGT.

This week, the head judge walked out onto the stage to join judges David Walliams, Alesha Dixon, Ashley Banjo and hosts Ant and Dec, in a purple gown with a slit on the side.

Amanda gave a glimpse of her neckline in the lacy one-sleeve number as she wore her blonde tresses down for the evening.

After the ITV star received backlash over her outfit choice last week, she reassured viewers she will be wearing a more modest dress tonight. 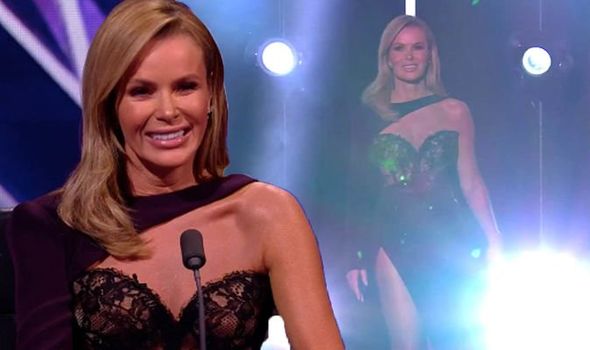 Amanda revealed: “I’m wearing a dress that goes down to the end of my arms and up to the top of my neck!”

But, the singer and actress jokingly teased: “Although you very clearly see them as obviously it’s a tight-fitting dress!”

She went on to tell the Mail Online: “I am seriously thinking my girls need separate representation to me because they are known on their own.

“They don’t need me, they’re going to go off and do Piers Morgan’s Life Stories on their own next year!”

Tonight, head judge Amanda will be performing Not When I’m Around from Sweeney Todd, a track from her new album.

Amanda addressed the comments today after many viewers took to their devices to address how her nipples were on show.

She announced: “I can see what people think, it had like an underwire, you know when you have an underwire bikini or bra, the end of it it’s like an upside-down U isn’t it.

“The end of it dug in. I was more insulted that people thought I had either huge saucepan nipples or nipples over my cleavage.”

It comes after the mum-of-two addressed the comments last week via her Instagram page as she responded to an article.

The article’s headline read: “Amanda Holden ‘sparks 235 Ofcom complaints’ with her plunging navy though-slit gown on Britain’s Got Talent after fans questioned if she suffered a wardrobe malfunction.”

In view of her 1.6 million followers on her story, she penned: “Mmmm really?! Who has nipples this close to their cleavage?! [Crying with laughter emoji]. FYI. A boned corset dented the girls [her breasts] all night.”

While the semi-final took place on our TV screens last week, many BGT viewers took to Twitter to share their thoughts over Amanda’s outfit.

One shared: “Just me, or does Amanda’s dress make it look like her nipples are out? #bgt @BGT.”

A second agreed and asked: “Are we not going to address the fact that Amanda’s nipples are out for all to see #BGT #amandaholden #nipplegate.”

However, many of Amanda’s loyal followers weighed in to defend her online.

One fan penned: “Whoever is complaining about seeing Amanda Holden’s nip on TV needs to have a serious word with themselves #BGT.”

Another social media user said: “I’m sorry but not people getting pressed about Amanda Holden’s dress, like get a f*****g life you losers #bgt.”

END_OF_DOCUMENT_TOKEN_TO_BE_REPLACED

END_OF_DOCUMENT_TOKEN_TO_BE_REPLACED
We and our partners use cookies on this site to improve our service, perform analytics, personalize advertising, measure advertising performance, and remember website preferences.Ok