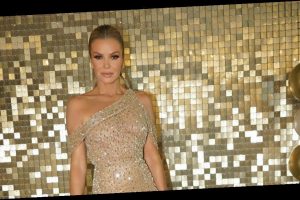 Amanda Holden has showcased her stunning figure in a gold gown for the Britain's Got Talent final.

The 49 year old, who recently recalled the horrific moment her babysitter left her three year old daughter home alone, took to her Instagram feed to share the dazzling look with her 1.6million followers.

The snap sees the star dressed in an off-the-shoulder floor-length gold dress, which appears embellished with crystals to give a shimmering effect.

The stunning number features a thigh-high split, enabling the presenter to flaunt her toned and tanned leg and her matching gold strappy high heels, too.

The blonde beauty, who recently said her son Theo "took her world away" after her tragic miscarriage, styled her mane into a middle parting and pushed it back into a bun in order to keep the focus on her beautiful face.

The Heart FM radio host wore a full face of make up, complete with eyeshadow, eyeliner, mascara and a nude lipstick.

"It’s a celebration… @bgt 2020 Live Final A @karl_willett & @jenniferclairofficial collaboration," [sic] she wrote alongside a British flag in the caption.

Fans were quick to gush over her, with many dubbing her the 'Golden Holden'. One person wrote: "You look totally stunning Amanda. Love the Golden Holden look," followed by a star emoji.

While a third couldn't help but reference the recent complaints she's sparked as a result of her previous BGT dresses as they added: "Deffo wow cant wait for the complaints wow no bra or knickers we can see it all for a family show get a life guys and girls she looked stunning". [sic]

The star had originally caused Ofcom to receive 261 complaints from outraged viewers who claimed she had flashed her nipples in a revealing sweetheart neckline dress.

Amanda also sparked further anger from fans who claimed the same thing with her dark purple gown on BGT from last week. The floor-length number featured one long sleeve and a corset bodice alongside a thigh-high split.

However, the asymmetrical black lace bodice appeared to reveal more than what viewers were expecting as many complained the gown was see-through to the point where they could see her nipples once again.

Annoyed fans flocked to Twitter to voice their outrage at her dress as one person wrote: "Amanda Holden may as well just come on in a pair of nipple tassels #BGT #BritainsGotTalent".

Another said: "#BGT Jesus, Amanda, may as well have wore nothing love." as a third mocked: "Why don’t Amanda Holden just come in her underwear #BGT."

And one viewer criticised the presenter as they added: "So no doubt everyone will complain about Amanda's dress and yes why not, after all it is supposed to be a family show, but the falseness of her is cringy. #BGT". [sic]

END_OF_DOCUMENT_TOKEN_TO_BE_REPLACED

END_OF_DOCUMENT_TOKEN_TO_BE_REPLACED
We and our partners use cookies on this site to improve our service, perform analytics, personalize advertising, measure advertising performance, and remember website preferences.Ok