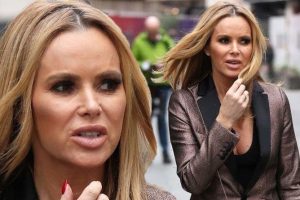 Amanda Holden, 50, recounted the details of her fall after she slipped on black ice while running naked in her garden that left her injured.  The Britain’s Got Talent star took a tumble as she tried to make it to her hot tub.

The incident left her with various bruises across her body just after the Christmas holidays.

She described the painful moment on her Heart FM radio show today.

Amanda explained: “I always think, ‘Oh, I’m not going to bother with that, I’ll just run down there naked and I’ll run back in’ because mine is not a towel dressing gown.

“You know I like being naked, but I don’t have a towelling dressing gown.

“I’ve got a fluffy one, so when you get out of a hot tub, it’s squidgy inside.”

Amanda said she did not see the ice she slipped on because her garden was dark.

She quipped: “It was right on the fleshy part of my bum, that’s why God invented bums isn’t it?

“Because they are like the cushions you can fall over. When you’re 50 and fall…”

But despite joking about it, Amanda was left with some “lovely” bruises and “so much pain down one leg.”

Elsewhere, Amanda recently reacted to the news of one of her fellow BGT stars getting engaged.

Speaking on her radio show on Wednesday, Amanda revealed how she received the news of Simon Cowell, 62, popping the question to his long-term partner, Laura Silverman, 44.

She explained that her co-star had sent her a text message on Tuesday evening to share the update.

Amanda said she was surprised by the message from Simon, which read: “It’s happening.”

She added: “Last night we all got the text saying, ‘It’s happening’, and we couldn’t believe it.

“And I knew it would be in the papers today if we got the text last night.

Lauren is said to have been left “stunned” by the surprise proposal and said “yes” to marrying Simon.

A source told The Sun: “Simon and Lauren are ridiculously, nauseatingly in love – incredibly, lockdown brought them closer than ever.

“Lauren was absolutely stunned and never in a million years expected Simon to pop the question.

“She burst into tears – happy tears – and obviously said ‘yes’ straight away.”